Since 2009 when I first started to travel and using from hostels (when you are young and not to much money to travel) to decent hotels (usually under 30$ per night) times come to move a a new type of accomodation – Aparthotels – which they rising started with Airbnb (which I used several times but decided to go better with aparthotels. An Aparthotel Vienna was a normal choice regarding the price of the other properties.

Since my first coming to Vienna, few years and and when I used a hostel the price had gone up very much and now that I am traveling in a couple, the cost staying a hostel for 2 beds can be sometimes higher than in decent hotel. Hotel were above my 40$ range in Vienna so I decided to go with an apartament and the choice was Columbus Apartments Vienna.

In the first place I was looking for accomodation in Vienna close to the train station – Westbahnhof – because I was coming after a long flight from Bangkok with Qatar Airways and did not want to spend too much on carrying heavy baggage and secondly, my next destination – Schladming was by train from Vienna and it was a morning train.

The Aparthotel Vienna Columbus Apartments is located not even 10 minutes walking from the Westbahnhof, the main train station that’s serve’s Vienna, the Austrian capital. It’s located as well not to far from other sightseeings of Vienna:  1.9 km from Belvedere Palace, 2.7 km from Vienna State Opera and 3.2 km from Albertina Museum.

How to get to Aparthotel Vienna Columbus Apartments

If you arriving the flight, take the train to Westbahnhof (schedule below). Don’t take the CAT (City Airport train as it’s more expensive) Take the Österreichische Bundesbahnen (ÖBB – Austrian Federal Railways). The price of a one way ticket costs 4,2 Euro. From the main station the distance can be made by foot in less  then 5-6 minutes.

The Check in & Check out at Columbus Apartments

Being an Aparthotel Vienna, there is no reception to your accommodation. The reception of the Columbus Apartments is a coffee shop close by the apartment  – The Columbus Cafe Bar. We arrived before 8am in the morning and the coffee shop was not open yet and we had to wait around 30 minutes till you managed to do the check in. After a short fill in papers and payment we were given the apartments keys.

The apartment consist of 1 big living room with a big bed, a small room with a small bed, a fully equipped kitchen, a modern bathroom and a washing machine.

Even if it’s located at the ground floor and the window are close to the main road it’s not noisy at all. The street is a dead end for cars (only parking) and people walking on the street are only the residential one’s and not to populated.

The room is large for 4 persons and full facility; we were only 2 person the space was huge for us. It’s Beautiful apartment, decorated with taste, high ceilings very charming with mainly white and dark colours.

Even if the bed was a bit low it was super comfortable. Pillows were a bit strange (too big a maybe too soft). Towels were provided at the check in at aparthotel Vienna; both for body and face.

Room had a huge TV; being the pre Fifa World Cup in Russia and Tour de France it was a nice addition to the room; to be honest was the first time in many places I have stayed when I opened an watch the TV. Mainly because it was very big!

The Internet worked very fine (it was DIGI Internet) and password and details were left in the room at the arrival.

The second room where you could have accommodated another 2 person was a room connected to the main room; so not to much privacy if someone from the main room wanted to go the kitchen or to toilet; they had to pass throw the small room. The bed was quite small and not sure how comfortable would have been for 2 persons to sleep; I think would have been suitable only for 1 person.  The extra thing which was in the room was the table and 4 chairs in which we have dinner or breakfast in the morning  during our stay in Vienna at Columbus Apartments.

The kitchen was fully equipped – from oven, fridge, washing liquid, plates, bowls and glasses. One thing I did not encounter in the european hotels I have stayed this summer compared with the hotels in south East Asia – they don’t provide  any bottle of water – free of charge. Usually when you arrive after a long flight and go straight to the hotel and don’t have time or it’s weekend you don’t have time to change any money and to buy some water.

The second thing is regarding the oven and the electric cooking equipments ; if you have travelers from around the world the machines there are using home either are not similar with what you have or don’t work with gas and people don’t know how to use excepecialy when it comes to using the fire.

The apartment come with a Indesit Washing Machine; and detergent was provided free of charge and balsam as well! Washing machine is a must if you are renting an apartment to the tourists!

With shower well separated from the main area, big area for  the sink and equipped with shower gel and shampoo the toilet was almost perfect.  Water pressure was very very good!

Was I lucky or was just an an pricing error? I booked first the cheapest apartment in Vienna because my wife needed the Schengen Visa and had to show to the embassy the hotel booking. When the Visa was obtained and our first destination was Vienna with a Qatar Airlines flight from Bangkok, I was still searching for a hotel but all the prices were above 70-80 Euro per night.

Then I looked again at the apartment I initially booked and not cancel it. The price was only 25 Euro per night; the apartment looked very nice; the hotel location was close to the Vienna train Station what I was looking for. Somehow it was too good to be true. The aparthotel Vienna did not have too many reviews – only 2-3 on Tripadvisor, few on booking but dated from last year and some 2-3* only on Google. At some point I wanted to cancel it but no other good option it remained. It was summer in Europe and the holidays were starting.

But in the end I decided to keep it and it was a great experience at Columbus Apartments in Vienna. Now if you are searching for the same apartment the price can be as high as 100$/night. But if you are a group of 3 or 4 person it does worth it.

You can book Columbus Apartment Vienna on booking.com for the best price for a hotel in Vienna. 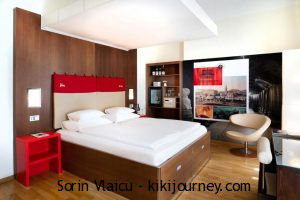 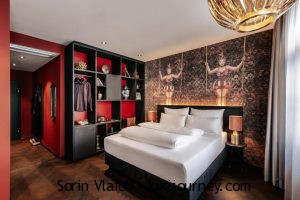