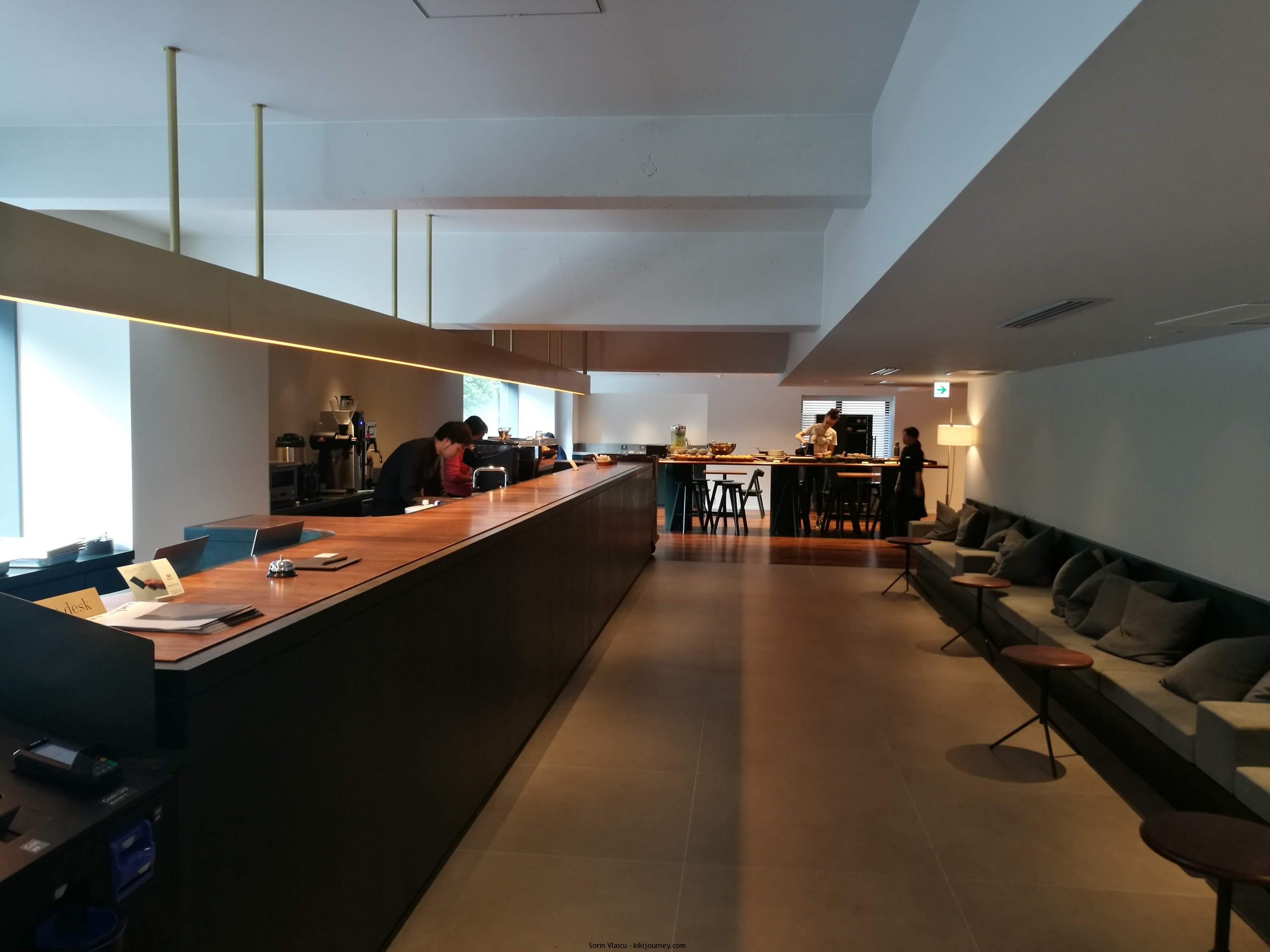 Price was number one factor when I am looking for a hotel. I am usually looking for a budget of 50$ a night which can go up to 20-30$/night depending on the destination. And Tokyo is not such a cheap destination when it comes to hotels. The rest of Japan as Osaka or other destination are decent priced and can find good deals.

I have started the hotel search for Tokyo quite late and not too many option where available. I have booked in the first place the Tokyo SA Ryokan . The problem with these hotel was that it was new on the market and no reviews; in the weeks to come I have followed to see if some reviews were to come or not. They popped up; some were OK, some not that great but bottom line was that the hotel was not that bad and room was quite decent. The current Booking score is 8.2 which is quite great. I book hotels with a minimum score of 8 at least.

The problem was with the location; I was I searching how to get to Tokyo SA Ryokan hotel from the airport or train station I always had the option to go by bus for the last mile. Taking into consideration that I would be traveling in Japan for 12 days with luggage with us, going by bus and especially at the beginning of the trip when you are not used yet with the destination and don’t have yet internet for Japan.

In a last attempt to book a different hotel and focused on the area of Asakusa to find I hotel where I have stayed last time when I come to Tokyo I have found the DDD Hotel Tokyo with a price of 75$ per room per night for a double room and breakfast not included.

Without internet you are lost in Japan; difficult to find the route, metro station, specific metro entrances as one metro can have more than 10 or 20 separate entrances! Since I had my Telenor SIM from Myanmar and had the possibility to buy a decent bundle of internet just to have it at decent price

It was easy to navigate at the Narita Airport as I remembered from last time how to get the train to the same area. Bought the ticket and took the same train as last time; it was the slow train which has many stops but it was the cheapest way. I have opened my GPS and entered on Google Maps the direction and in the application had the live tracking of the route. I did not bother to look at the station. Even if it was the same line and Google was keep telling us to stay on the same train every time I search again, I had a different option. At some point decided to go down from the wagon and go back to the main station we have passed. As we tried to understand where we are you took another train to other direction and decided to change to a JR line which connected to our hotel. As we have arrived in a bigger station we tried to follow the sign to exits and to find our specific line. As we did not manage to find it (we were a bit tired after a long flight from Yangon to Tokyo with a layover in Bangkok) we decided to exit the station

Do you think it’s that easy to exit the station in Tokyo? Not with the right ticket or without the updated fare one as we did not know how to do it. After a small fight with my wife decided just to jump over the barrie and to find our JR line); I even tried to talk with someone via a speaker but it was useless!

So after 10 minutes trying to locate the station we have finally arrived to it (almost got run over by a train as the barriers were down and had no idea why that was for! As we arrived at the right station it took us another 10 minutes to find the right entrance and not every entrance serves the correct direction. Lucky someone saw us how lost we were and guided us to no 28 entrance. Till our place we had to change only 1 time. The problem was that we had to exit and enter again for another station located 3 minutes away: this was the easy one. It took us another 15 minutes and many trains to pass to find the right direction of the train. We have to trust my travel knowledge: with more than 60 countries visited it was the first time when I did not managed to get easily from the airport to hotel and have travel in time when the internet and GPS was available!

After almost 3 hours we have finally managed to arrived to our metro station and headed to our hotel!

I was taking with my brother whom had arrived before us even if his flight was later than hours and explained me how to find the hotel as there is no sign or any other information outside the building. We can easily pass the building and can no realized it’s a hotel; the windows are black and can not see from outside and door opens automatically so we have to step in order to see that there is a door!

I did some search before traveling to Japan and I knew some rules are to be followed in order to keep with their traditional way of living and not to be considered rude to the local population.

I was surprised to read that most of the hotels are very strict when it comes to check in hours. If it says 2pm it’s 2 pm. Not even 1 minute earlier! In Europe and especially in Southeast Asia in countries like Thailand or Vietnam if room was available at 12pm let’s say with 2 hours before the check in and it was ready to go it I would be already be checking in. The only weird situation happened in Schladming, Austria when check in was at 4pm and even if the hotel was almost empty, check in happened after 4pm!

So I knew about the check in time would be 3pm and since we have arrived around 11am and still had 4 hours to kill decided to have a lunch at a restaurant close by. We came back at DDD Hotel Tokyo around 1pm and stayed and sleep a bit in the lobby hoping our rooms to be ready a bit quickly since we were already there. At 2pm we decided to ask if our rooms were ready (hotel was not too full and has quite a lot of rooms) but they were saying it was not ready.

5 minutes to 3pm they announced us the room was ready and could no the check in. The process was very interesting and fast which I liked about this hotel in Tokyo. We scan your passport, introduce your details and at the end have the payment method and can pay directly by credit card. Self-check in would be a thing into the future for most of the hotels and taking into consideration the current Coronavirus issue it would hurry the things up to be implemented by namy hotels around the world!

The beds are very comfortable; I have even took a photo of the mattress as I slept very well during my 3 nights stay at this hotel in Tokyo. There’s a tablet in the room to access the internet and YouTube. Nihonbashi and Bakurocho are within walking distance.

Room is cozy and big enough for one person, but more than that beds , pajama, amenities are selective and super high quality incomparable to 5 star.

I have booked the Minimal Double Room. For one person it might not be enough in terms of space but most of the hotels in Tokyo are quite small. Our room had 14m2 and it was decent space to put 1 luggage; if you have 2 big luggage I think we will struggle to walk in the room.

Room is small but cosy! No tv, table or dressing table. Basic amenities such as hair dryer, cotton bud, shaver etc are provided. There is a mini refrigerator and safety box as well. Tablet provided in the room which you can use to watch youtube.

Even if our room had an window and faced the street it was very quite and we did not hear any noise from outside.

Towels provided are those used in luxury hotels; almost wanted to buy the shampoo and hair treatment as they gave the hair a silky feel. Unlike other Japanese hotels, toothbrushes, toothpaste and combs are not provided. The amenities, service, and quality have been top-notch for us. The shower is a proper one, separated from the toilet.

Shower  pressure was great and toilet is very clean and room and toilet was clean on daily basis.

The toilet menu was only in Japanese but signs were clear enough in order to understand the meaning of each botton.

The cafe in the lobby is amazing as well as their croissants. Would definitely recommend anyone to stay here. We did not have the breakfast as decided to eat from takeaway area at 7 Eleven  which was not such a bad idea due to the good quality and price. We had every day coffee at the lobby as we were given 2 welcome coffee vouchers to be used during our stay.

We have booked the cheapest room available at the price if 75$/room/night without breakfast. Taking into consideration the room facilities, staff and amenities it was a very good deal for Tokyo. I have check now the room rate and it seems they have it raised to around 95$/room. To be honest it’s a bit more than my budget and if next time when visiting Tokyo I would probably go again with DDD Hotel only if the price is similar to my first visit. Otherwise I would probably booked a hotel in the same area or a hotel close to Asakusa.

Where to book DDD Hotel Tokyo?

Hotel can be booked only on Booking.com, TripAdvisor or Hotels.com and Expedia.com