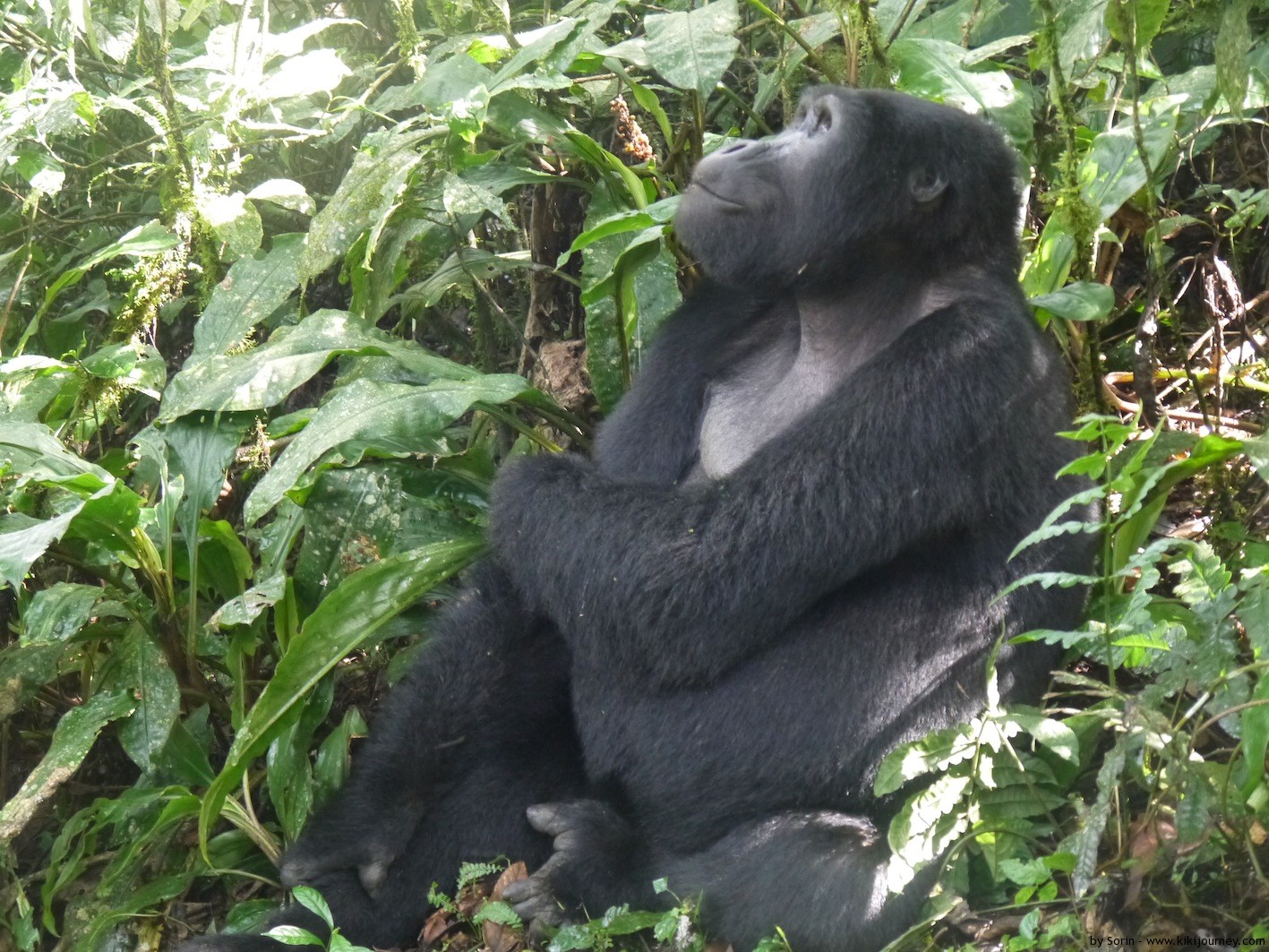 While in Uganda a must to do thing is the Gorilla Trekking. They’re only around 800 gorillas remained in the whole world. More than 20% can be found in Uganda in 2 national parks – Bwindi Impenetrable Forest National Park plus Mgahinga Gorilla Park. The Bwindi Forest is part of the Unesco World Heritage Sites.

Only 3 countries in the world can say that they have the Gorillas on their territory  Uganda, Rwanda and Democratic Republic of Congo (DRC). The political situation is DRC makes the visit of the gorillas a bit impossible and dangerous at the same time. That makes only 2 countries available. But where is the best place to go?

First, you take into consideration the cost. Only the permit for entering the park is 500$ in Uganda and 750$ in Rwanda. They made the rise in price in Rwanda a few years ago in order to make it less tourists and to protect more the gorillas. Depending where you will be accommodated, add between 350 and 1000$ per 3 days, accommodation  transportation and guides. That makes the minimum price for the Gorilla Trekking around 850$. Not bad, but a bit expensive. But it worths!

Doing the Gorilla trekking by your own can be a bit difficult  First, you have to obtain the permit from the Tourism Authority. I am not sure if there are direct busses to the location, towns located near the park. If they are, are not straight and you might change several buses till the ending point.

During low-season and rainy season the permit cost can drop up to 250-300$; in the month of may usually you can find this deal. But its a bit rainy season and the trekking can be harder.

My journey of seeing the mountain gorillas started in Fort Portal, with a 9h ride to Bwindi. The good part was that we crossed the Elisabeth National Park and seen other animals as well. I wasn’t that lucky to see elephants, but I was very lucky to see a lion on the way back!!

Beside the views from the national parks, they are also amazing villages on the way located in the tea plantation area. Our accommodation place was Buhoma Community Rest Camp. The good thing about the place is that 25% of the money we pay goes directly to the community near the park. And to be honest, I could see the difference; people had better clothes, all had shoes and the school and hospital were above average as per Uganda. 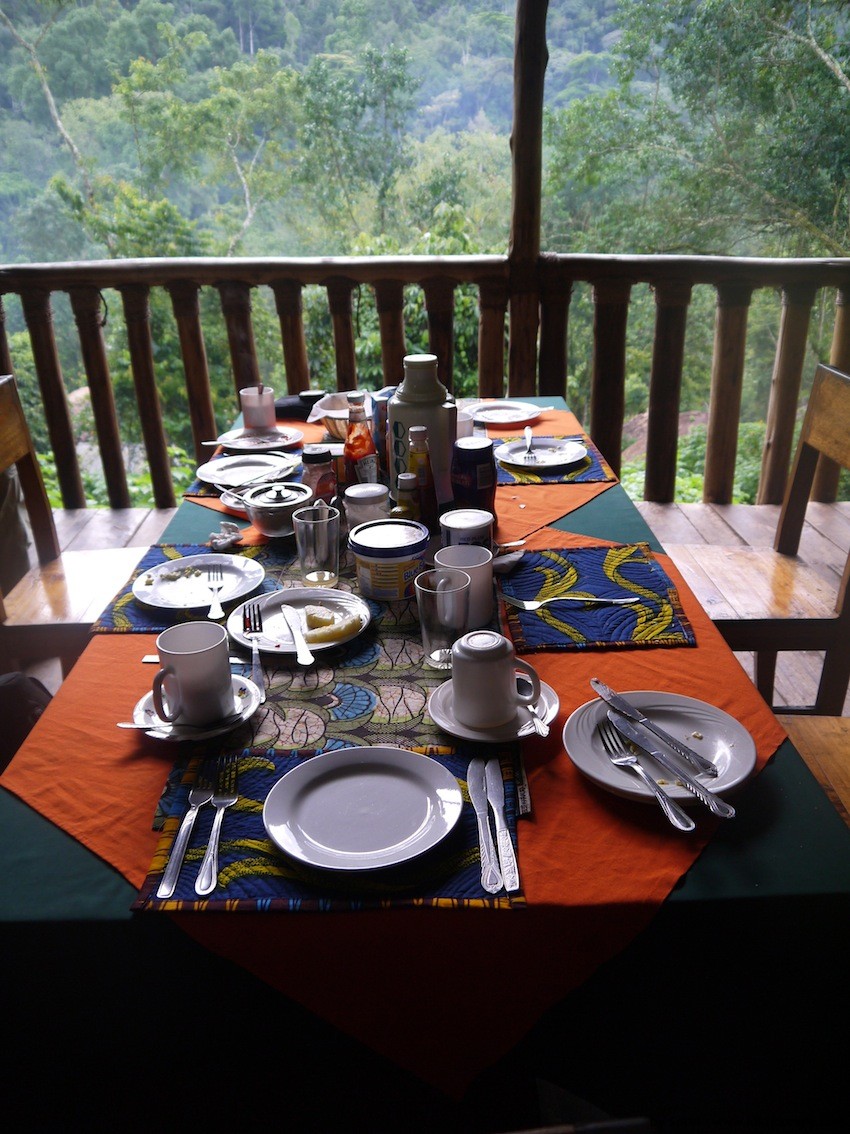 After a long an interesting sleep in the self-contained tent; where the noise from the forest was pretty impressive, an early breakfast and here you go to track the mountain gorilla  First it was an orientation course to put it this way. A short presentation about their habitat and their way of living, followed by some basic rules to be followed when the encounter with the mountain gorilla will happen.

There are 7 family groups in Bwindi National Park: Habinyanja group, Rushegura, Nkuringo, Nshongi, Bitukura and Kyaguriro. We were sent to track the The Rushegura group has about 19 individuals and one Silverback. One of the most important rules is the distance once; the minimum distance to keep between you and  them in 7 meters. Well, that rule was broken several times during the encounter. 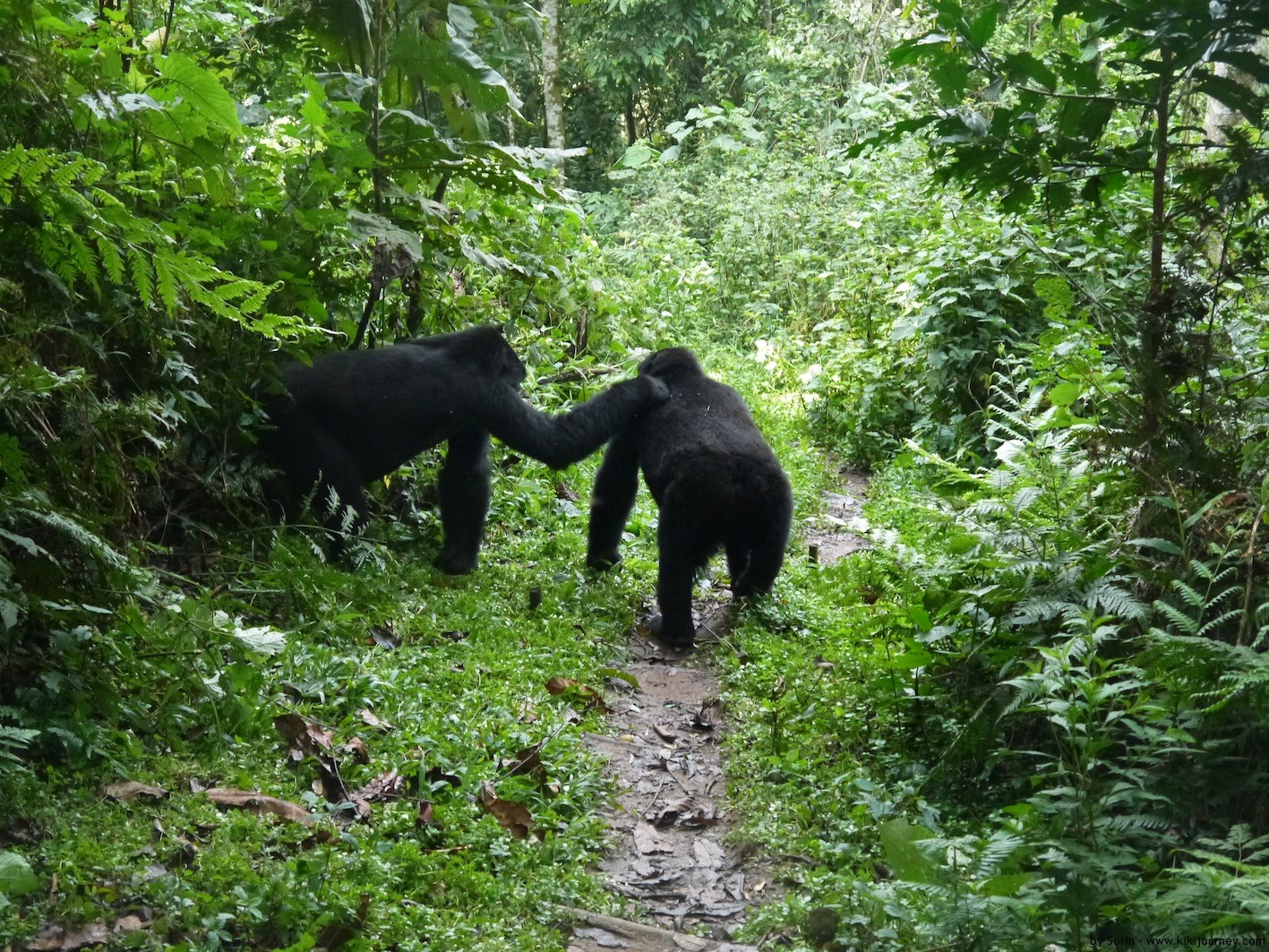 About 8.30 we started the trekking  Let me explain how the gorilla trekking works. The gorillas are always on the move in search for new and fresh food; and places to spend the night.  So from the last encounter point, the rangers usually track them very early in the morning and they know exactly their location and to take it to the main guide. So the changes of seeing them are around 98%; few times happen not to see them; this happens due to the fact that they are faster than the humans and their new route can be very inaccessible and hard.

Usually the gorilla trekking can last between one hour and 6 to 7 hours in order to encounter the mountain gorillas  I don’t know why, but I was expecting the encounter to be more special, amazing, unique. It wasn’t that way. And the reason could have been the timing. After only 45 minutes or breaking I saw the first mountain gorilla  It was climbing a tree just 2 meters away from me. Then another one came from behind!  It started to look more promising!

Then we started to follow them and to try  to find the Silverback, the male of the group. The gorillas were simply walking on the path and the group of “Japanese” photographer were following them. From time to time they stopped just in order for us to make some good pictures.

One of the most expressive gorillas was the baby-sitter. Each gorilla has a specific role in the group. The baby-sitter has to look after the little ones. She was so gentle, cute with a very friendly and human face; and I do believe she does an exceptional job!

Then it happened! The gorillas showed us the road where the Silverback was! And he wasn’t alone. 2 little gorilla babies were there too, playing. Like a cool father, he let the babies play for more than 45 minutes. They were playing just in front of us, from time to time they were beating their chest with the fist making some sweet noises.

Then the Silverback beat his chest and all the group just followed him! It was a memorable hour spend next to the mountain gorillas. How friendly they were; mainly I think they are used to people and they know we don’t hurt them.

For a traveler its a must do things even the price for the gorilla trekking  is quite high; the experience is amazing and usually you do it only one in your lifetime. 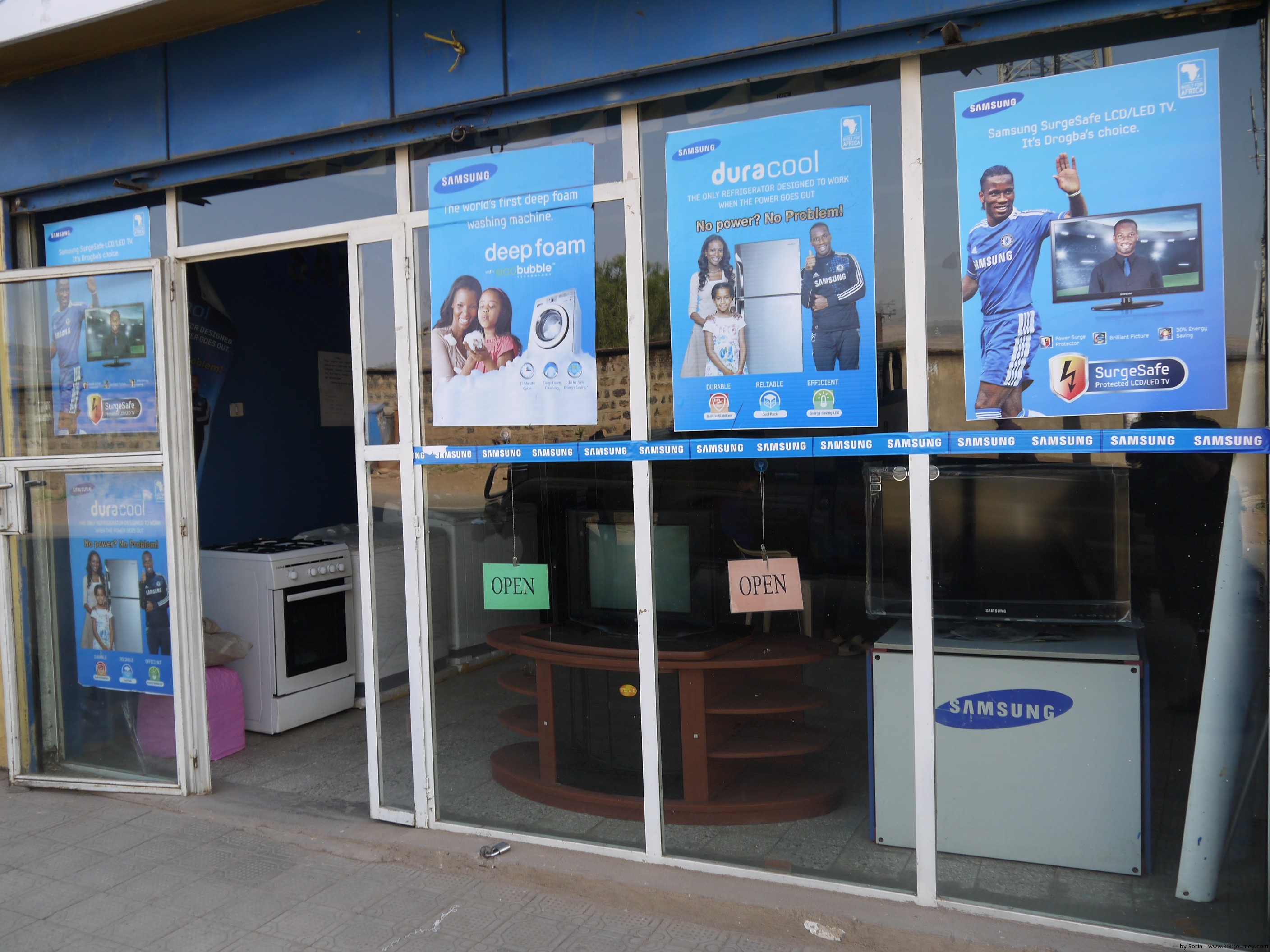 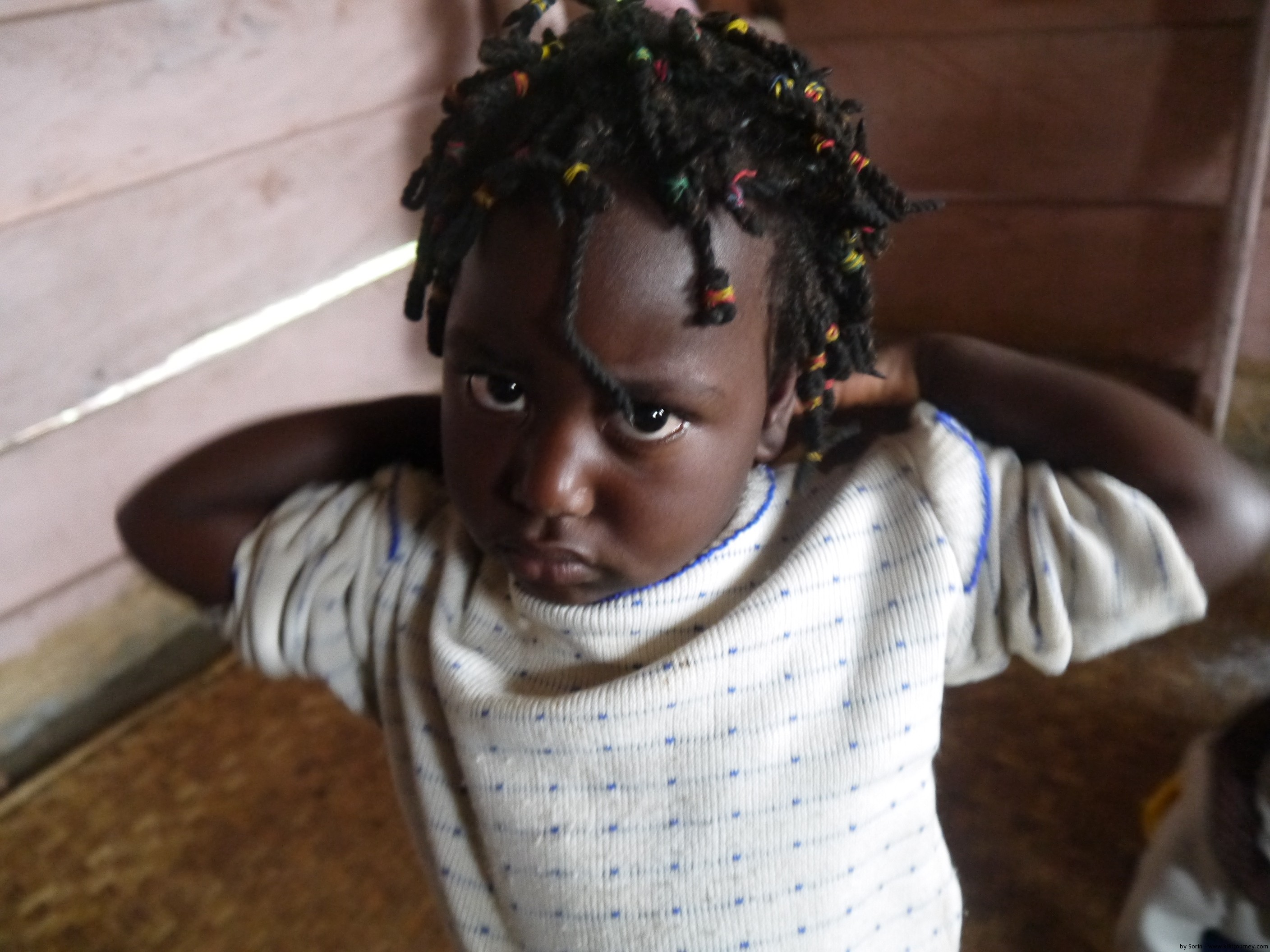 Last day as I teacher at Fort Portal School