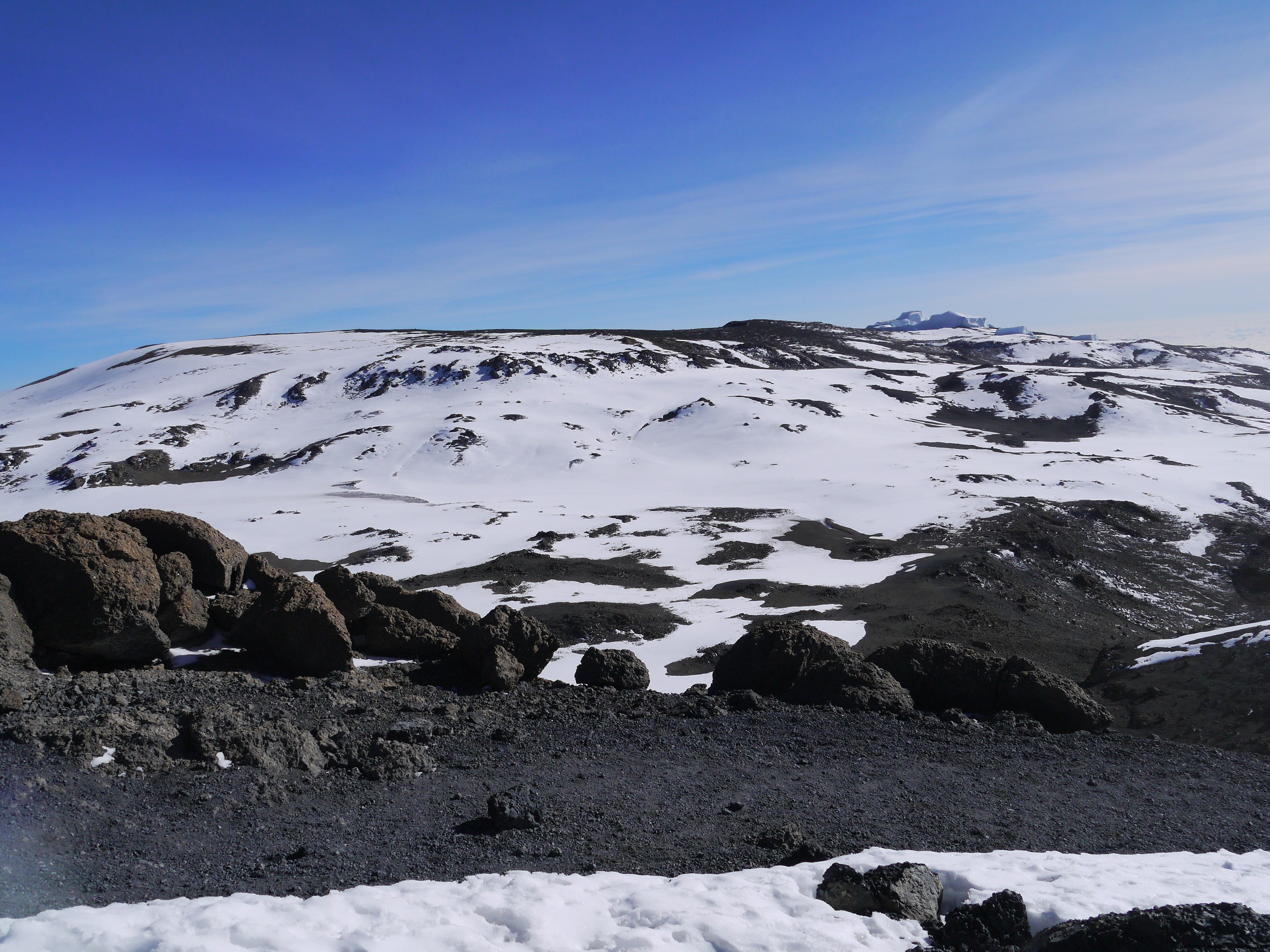 4 hours of sleep. That’s all you had before going to start the final climb to the summit. Only 4 hours after almost a full walking day. Only 2 hours in total managed to be slept. A crazy and noisy wind was blowing outside. The emotions regarding the climb. Will I or will not succeed? High Altitude Cerebral Edema was another thing on my head. Did I drink enough water? Will my body collapse or not? Already dressed I went outside my tent. A bloody wind was waiting for me! Everything was completely black. Only some small lights to be see already on climbing route to Uhuru Peak. Some people were already starting the ascent.

00.30 pm: After a  warm glass of milk and some biscuits I was ready to hit the road. We  are expecting 7 hours of climbing. All in the dark. Only with our head torches as the light to show us the path. Everybody  in slow motion. Pole-Pole.

In the next 7 hours I will only see the feet of the person in front of me. And the strong wind furrowing my face. I will never see the peak. It will be hidden like the Castle in Prague. I have no idea how hard the route will be. How many rocks are in front of us and how steep it is. Maybe we do the climb by night not to be scared and not to give up, seeing the horrible path which we are about to climb.

To Fall:  short of success or achievement in something expected, attempted, desired, or approved: The experiment failed because of poor planning.

Something was not planned all right. After only 40 minutes of climbing I was on the edge to collapse. I barely could breath. I was sweating like crazy. My feet were dead. I couldn’t believe myself, I was about to surrender. Took a 5 minute break. I was way too much covered in too many clothes. Took of one jacket and I was already feeling better. Took 2 sips of warm water; it didn’t have time to get cold after being boiled. One of the guides took my small backpack. It wasn’t that heavy, but without it I was flying once again!

It was getting colder and colder each step forward we were making. The wind was with us too. We were climbing in zigzag. One a Zig, the wind was pushing us from behind, giving us an extra moment of respite. On Zag it was blowing straight to our faces! A glacial wind.

I think we run out of breaks at the previous camp. Except one small break, we were climbing no-stop for almost 4 hours. I head voices behind and in front of me. Time for a break? When is time for a break? Can we stop for a minute? Max, the guide seems to be deaf and crazy at the same time. Is he trying to kill all 10 of us? Shall he get a reward for each Muzungu killed on Kilimanjaro? And the break comes. Water and some bars of chocolates. The water is cold and can hardly manage to swallow it. Some tea would be great! But we are at almost 5500m! What a naughty thought!

Bun miracles happen on the mountain. One guide comes with a thermos, full of hot tea! The tea is so good at this altitude! Gives me the extra power in order to raise on my feet again. But in the same time after drinking it I felt like going to bed. I was dreaming about a fluffy bed since day number one! Please don’t close your eyes; Max is saying to us! If done, you might die here. But who is going to fell asleep when it’s that cold and windy? I close my eyes for one second. The next second I was already sleeping. Luckily I woke up the next second!

I have no idea what is the time. How much did we managed to climb and how much we have to the summit. The only natural clocks we have are the Moon and the Sun. I watch the Moon going from left to the right. In this way I estimate the hour. It’s almost morning. But there is no sign of the Sun. I know that in the same time with the sunrise I am close to the top. Or almost there!

And suddenly I see it! The sunrise at 5800m is absolutely fantastic. Unfortunately, I do not have my camera ready. And my hands are so cold; it would have been impossible to take a shot! But who has the straight to admire the sunrise. Only a short glimpse on the right side to see how red and white reunite and thats all. 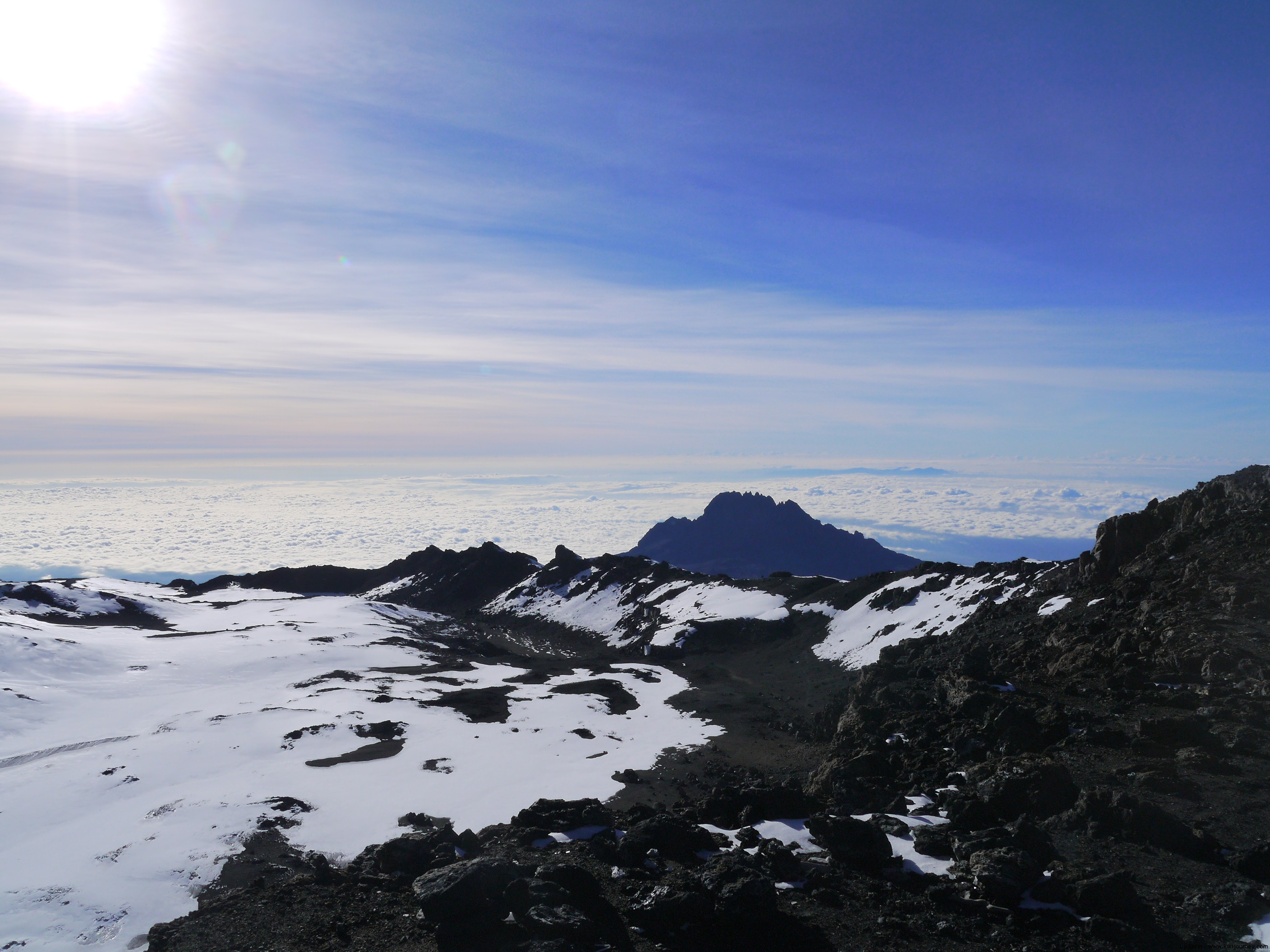 Stella Point is coming, Max is yelling! I am almost there! I can barely feel my hands and my feet are starting to hurt. Last year I met an Australian Mate while traveling to Poland. Then he came to Romania to and heading then to Mount Kilimanjaro. He was training every day. Running at least 5k a day. After he managed to climb Kili, he told me: Sorin, when you will be almost there, when you won’t feel our feet and they will be hurting like hell, don’t stop. Keep walking cause the power is in your head. I followed his advice… 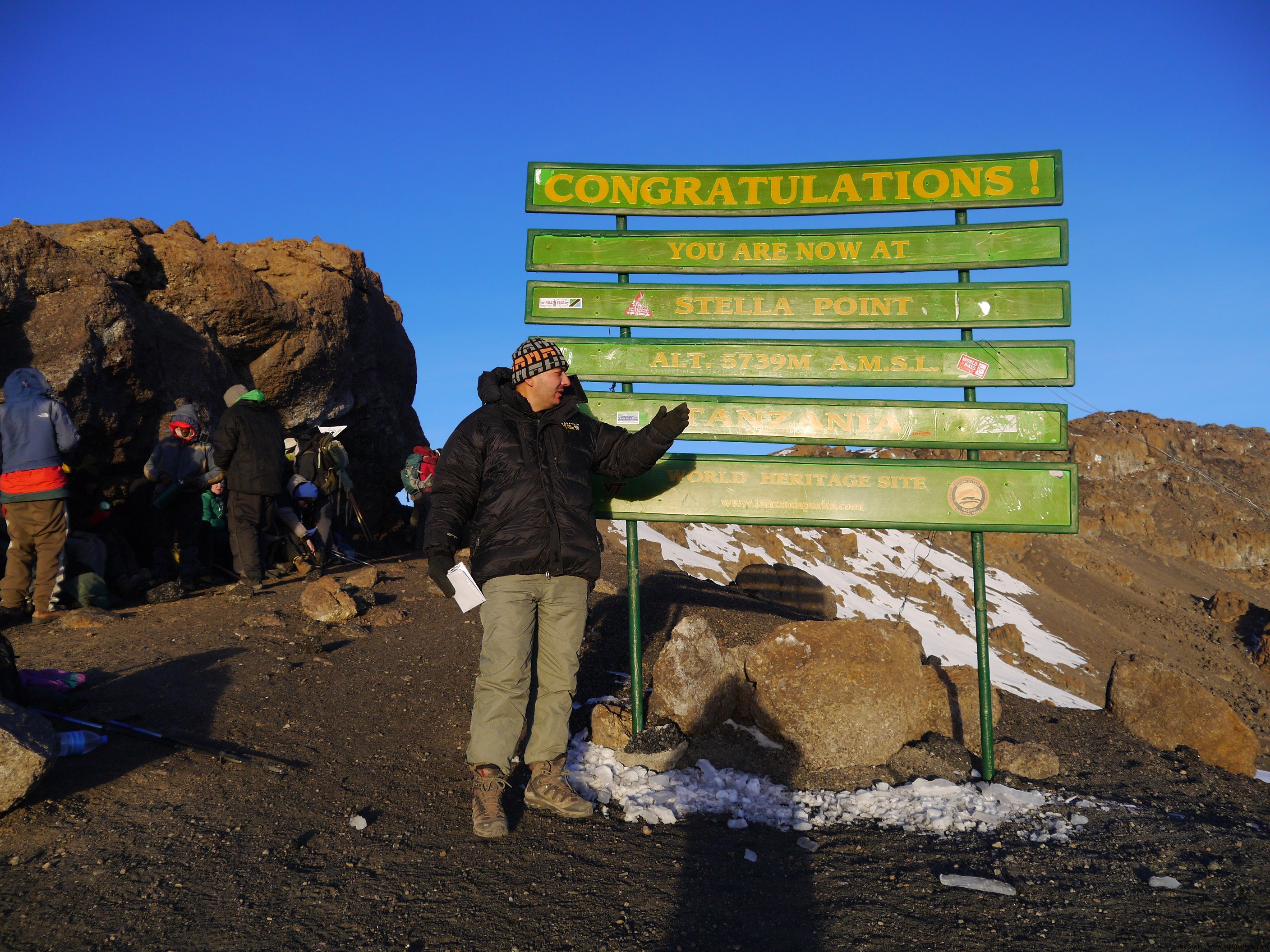 Lucky we were not heading to Stella Point and straight to the Uhuru Peak. I was starting to feel a bit dizzy and to see with misty eyes! Suddenly we were turning left and a some a green sign was appearing in front of us! Finally, I managed! I climbed this damn mountain. I climbed Kilimanjaro! I was smiling inside. But not for long. With my misty eyes I managed to read: Congratulation – You have reached Stella Point. Nooooooooooooooo!

I never felt so disappointed in my entire life! Maybe once when I did not manage to get a scholarship for a master in Spain. I had no energy left. I was feeling a bit sick. Breathing not very well and with the sensation to vomit! I sat down on a cold rock and thought of nothing. I was almost bursting into tears. So close and I cannot make it! Such I looser I am. I turned my head to Max and told him I was not going to the top. I want to go down. I don’t feel well at all! He had a secret weapon: an oxygen tube! My oxygen level was at 65%. The normal limit should be above 80%. He put the tube, but no improvement was showing. And 3 tries, he realized it was not connected to the tube..

Only 45 minutes to the summit. After 4 days of climbing this was be a piece of cake. Alone I started to walk again. The wind was still with us. Blowing from every fucking direction! I almost fell twice in the snow!

After 10 minutes of very slowly walking I was down again. Had no extra energy to be exploited! Again, I was feeling very disappointed and was about to return. Was starting to feel bad again and HACE was on my mind. I was not going to die in such a stupid way! Stopped and turned back. In front of me, Merele a Dutch girl was standing. What are you doing? Going back cause I have no power left and don’t feel well! No, you are not! Yes, I am..I wanted to say, but had no energy to talk either.

You are going to follow me. Follow each step of mine. I will go very easy. I promise. And she did. Walked in front of me. Kept a bit the wind away from me. Even so, I could hardly manage to keep the rhythm.

50 minutes after the Stella Point I was there..on the top. The last 45min had been the most quiet  one in my head. Had nothing. No thoughts, no memories nor songs. Only staring at Merele boats.

The sign with congratulation was in front of me. What was the first thing to do when I reached the top? I sat down. I was feeling so dead-alive. Managed to open my backpack and drank some water. 80% of my water were ice so one 2 small sips. Had some biscuits left and eat some. Not sure what was on those biscuits, but I had suddenly  energy! And I was smiling for the first time. And realized that I did it! Succeed to climb Kilimanjaro! How would have thought. I for sure no.. 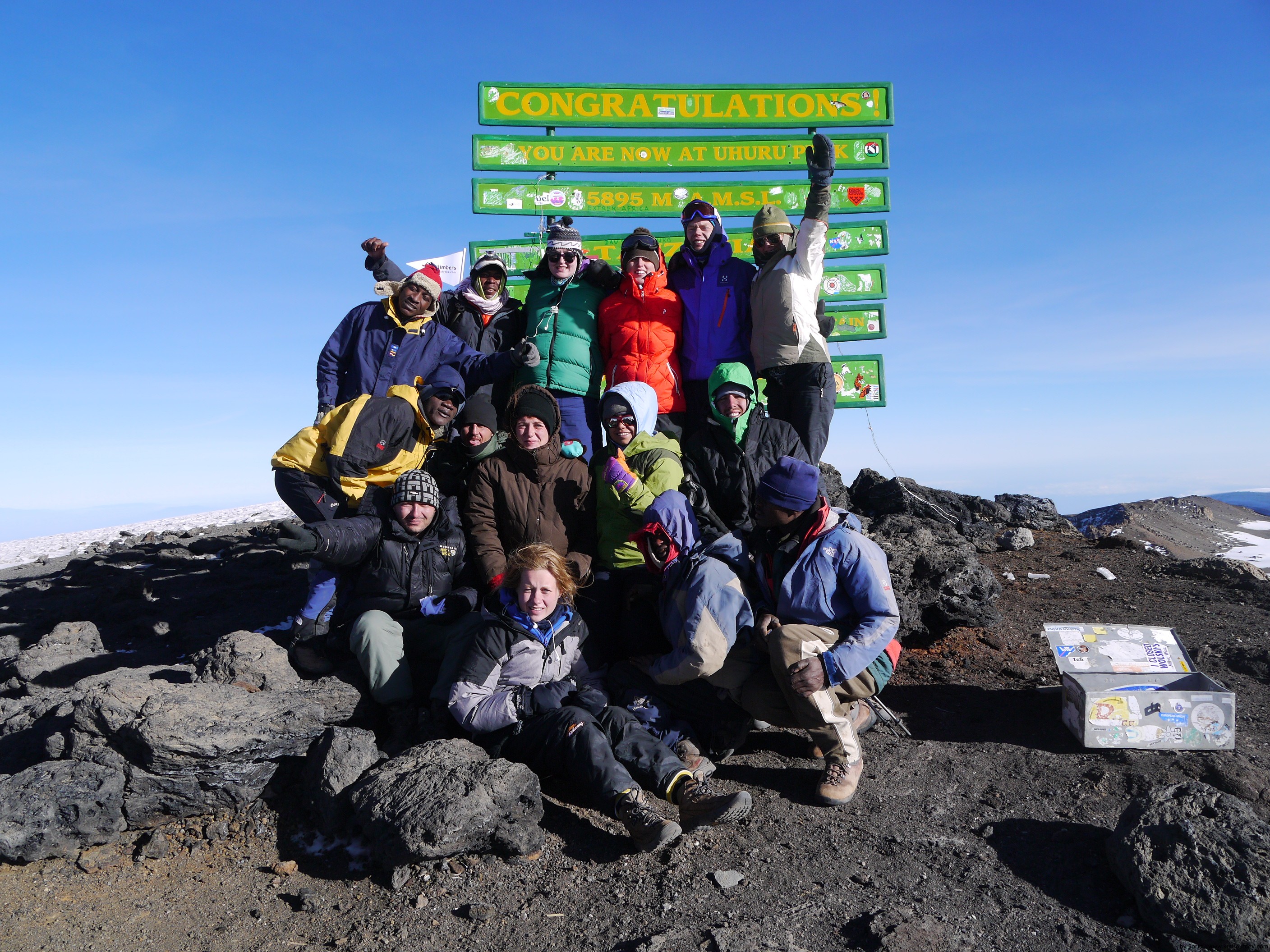 Managed to do some picture with half of the Romania flag; printed on an A4 paper in Moshi. But it was so windy that it torn apart. Only 10 minutes of joy and photos. The risk of HACE was still there and another 5 hours of descent were about  to come… 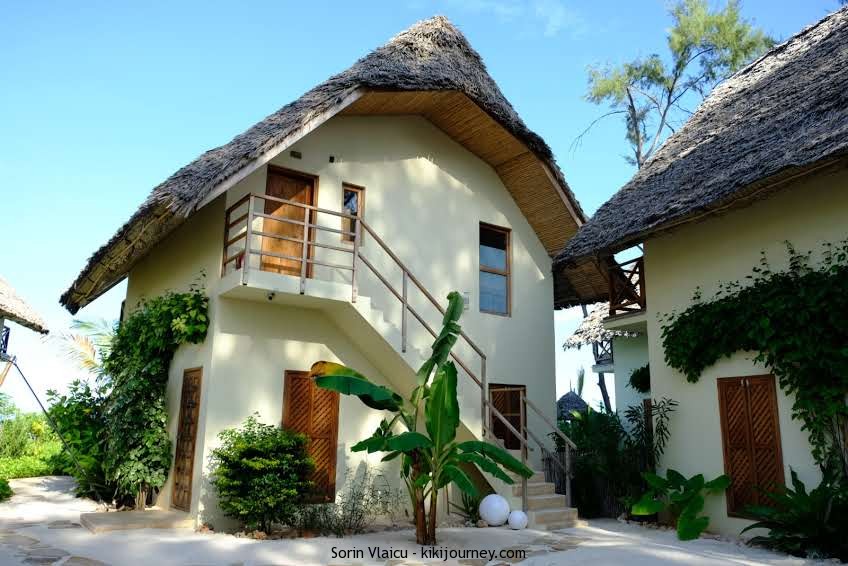 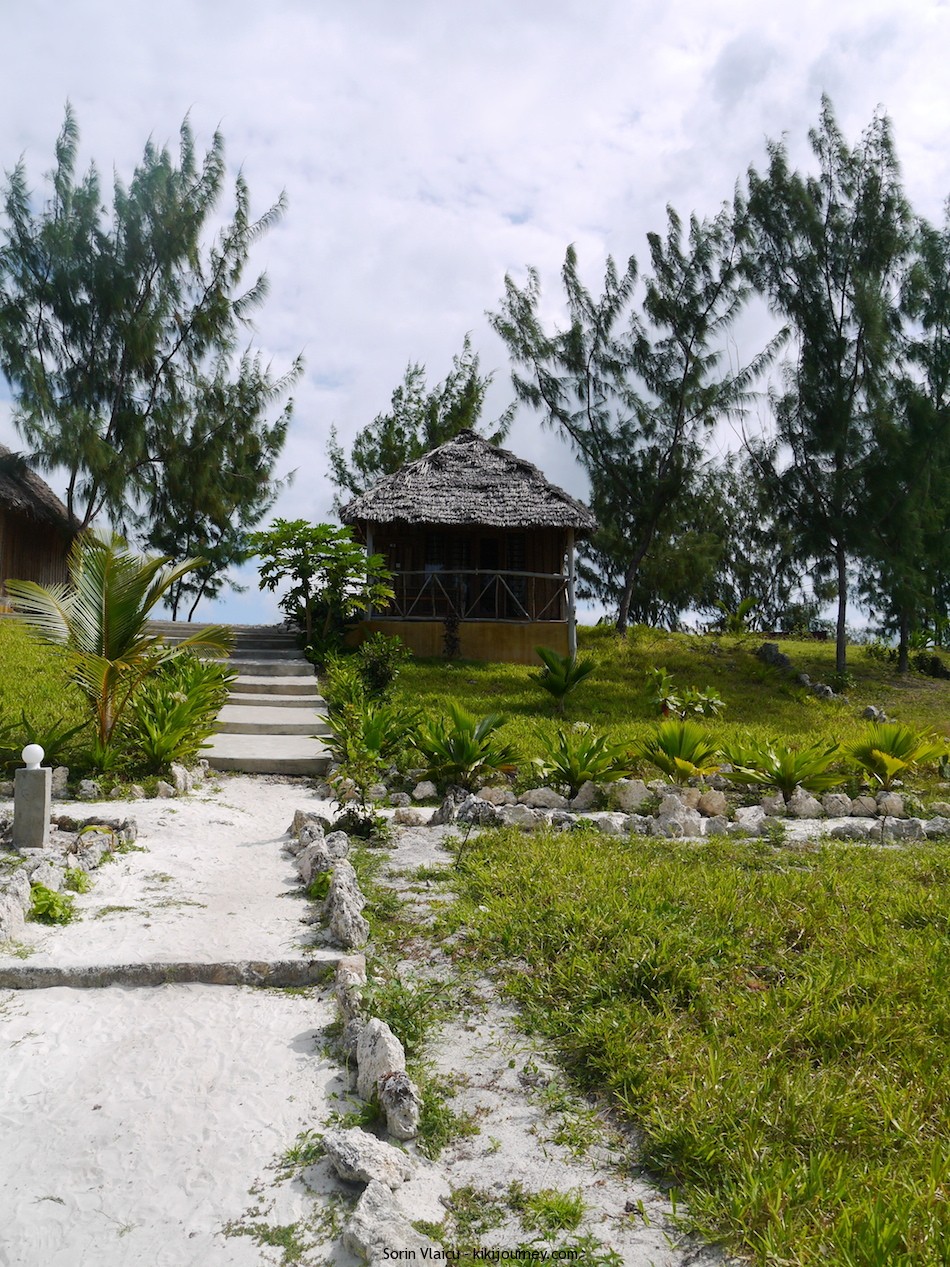 See all 1510 articles
We use cookies to ensure that we give you the best experience on our website. If you continue to use this site we will assume that you are happy with it.OkPrivacy policy