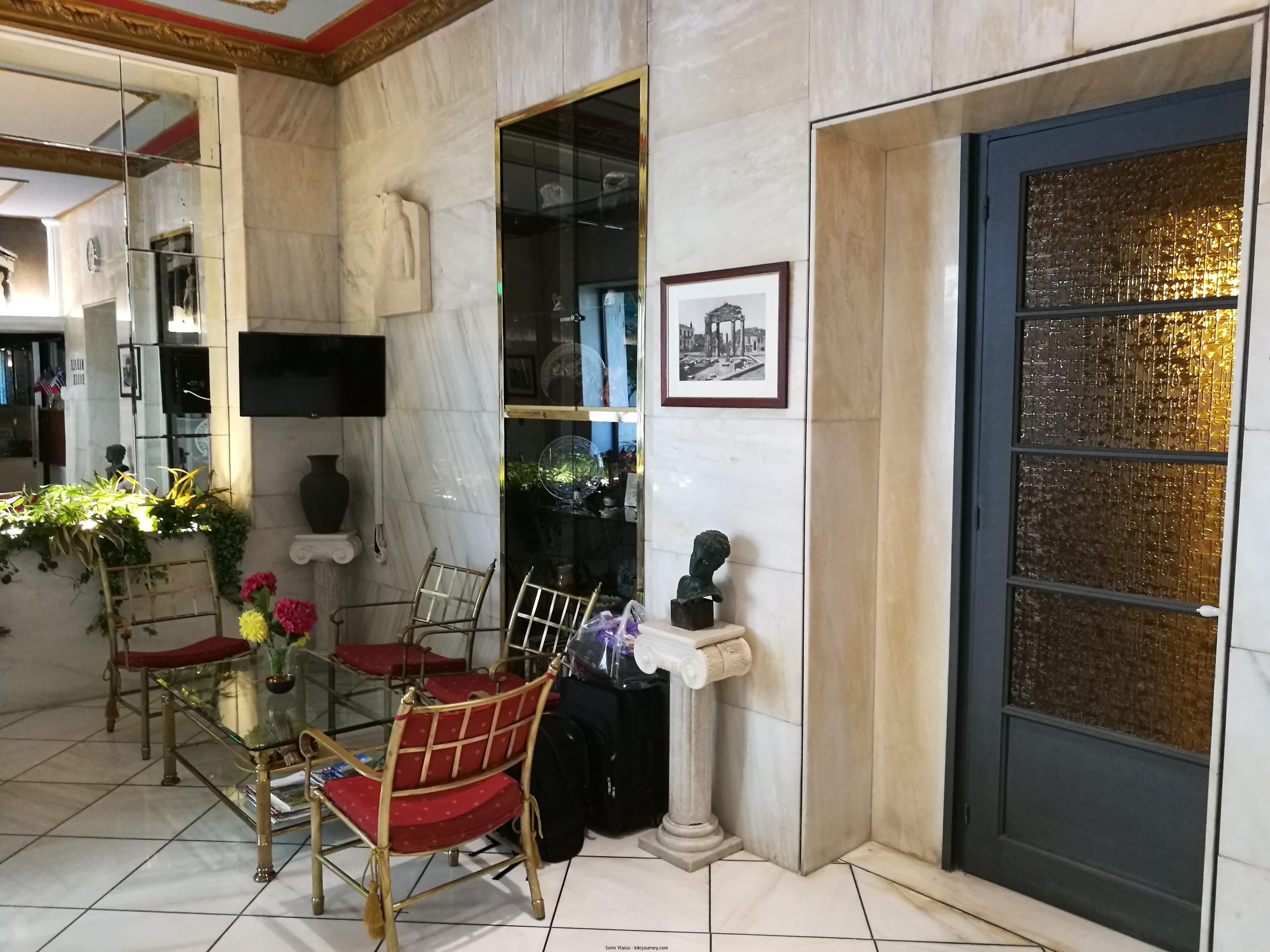 Even if Greece is very closed to Romania, 55 countries had been visited before arriving in Athens, the Greek Capital. Marble House Athens was the hotel I have chosen to stay in Athens but after a very long research.

Due to the immigration problems in the past years, the greek strikes and the poverty & high unemployment rate in Greece, the capital was not such a save place to visit. Having a good friend in Athens I asked her what areas are to be avoided and which areas are safe to stay in Athens and to stroll with no hassle even in the late hours. Omonia, Metaxourgio, Patissia where the neighborhood to be avoided.

And then she suggested me to find a hotel in Athens in the following areas: Koukaki, Metz, Neos Kosmos, Nea Smyrni, Sygroufix, Syntagma and Plaka. Secondly I needed a hotel to be close to a metro station because I was to arrive after 9pm and leave early 3 days later by ferry boat from Athens to Santorini.

Marble House Athens was the best choice I could have found online in terms of prices and location for my 3 day stay in Athens.

How to Get to  @ Marble House Athens

By Metro: Board the Athens Metro from the «Airport» station (Line 3 – Blue Line) which is the starting point of Line 3. Make your way to the city center and alight at «Syntagma» station. From there, change over to Line 2 – Red Line, travelling in the direction of “Elliniko” and alight after two stops at «Syngrou-Fix» station. Take the Drakou Street exit, from Syngrou avenue you walk downhill and on Sygrou No 100 (there is a “Citroen” car company right at the corner) turn right on AN. ZINNI street, and then take a right turn again on the third street up which is a dead-end. You will find the hotel on your left-hand side.
Duration: Approximately 50 minutes
Cost: Single Metro tickets from airport cost €10.00 while return tickets cost €18.00 special discounts for kids.

By Bus: Board the express bus service X95 (Airport – Syntagma) from the airport’s bus terminal to its end stop at Syntagma Square where you will join the metro system. From «Syntagma» station, take Line 2 – Red Line, travelling in the direction of Elliniko and alight after two stops at «Syngrou-Fix» station. Take the Drakou Street exit, from Syngrou avenue you walk downhill and on Sygrou No 100 (there is a “Citroen” Car company right at the corner) turn right on AN. ZINNI street, and then take a right turn again on the third street up which is a dead-end. You will find the hotel on your left-hand side.
Duration: Approximately 1 hour and 15 minutes
Cost: Single Airport X-press bus tickets cost €6.00. Single Metro tickets from Syntagma cost €1.40

We tried the both options since we stayed one more night in the same area (not hotel since Marble House Athens was fully booked) and even if by bus is cheaper I would prefer the metro option because is more faster.

A short walk to Syntagma Rail Station, which is one of the links coming from and going to the airport. Even more central to the city, with it being a 10 minute walk from the Acropolis, flea market and loads of cafes, bars and restaurants, not to mention shops

This is a very well-run, small hotel, which has been in the same family for more than 40 years. Christos, Nancy and Nichos, on the front desk, are welcoming and well-informed which enables you to experience Athens more like a local, as well as take in the major sites, which are within easy walking distance (eg, 10 mins to the Acropolis).

This place is a real find, It is not directly in the tourist centre, but only a short bus ride away from the Acropolis Museum. In fact, a single bus ride will take you to Syntagma Square and the National Museum, making this an excellent base for sightseeing. The residential area around it is charming and safe. You find a small supermarket, hair salon, beauty salon, post office, and some great local restaurants and bars all within walking distance.

Even if Ryanair flight was on time, at the airport we have waited more than 40 minutes for our baggages and then we missed the train by 4 minutes and had to wait another 30 minutes for the next one. That made us arrive at our hotel in Athens after 10pm. We knew before that after 10pm there might be no receptions and we had to do ourselves the check in. The surprise when you arrive at Marble House Athens was that the door was locked and our key was inside. We saw from the window the message and the key waiting for us but no solution to get inside! We waited a few minutes and was about to call  the owner of the hotel but luckily some tourists arrived and they opened the door for us.

Maybe they should put an automatic system at the door so the late arrivals.

The hotel has many room types  – from dormitory beds to private rooms with shared bathroom and with private rooms and ensuite bathroom.

We had booked a double with shared bathroom on the third  floor with a balcony overlooking the leafy cul de sac. Small but functional, no street noise, but some noise from the comings and goings in the corridor (this room was booked some months in advance for our trip to Greece in July 2018.

Even if we had a shared bathroom (it was shared with other guests on the same floor), we hadn’t any sort of issues since there were no other guest at our floor. The shared bathroom is nice but a bit cramped which is norm for smaller hotels.

The room with own bathroom ( 5 Euro more)is better and worth the small extra cost but it was fully booked on booking.com when we did the online booking for our stay in Athens.

Place lacks some interior soundproofing but everyone generally followed the try to stay quiet rule and we had no issues at all outside of normal footstep on stairs sounds.

The rooms were spotless, the wifi connection excellent, English TV stations, and an in-room safe (ask at the desk for the key). The balcony is a nice addition to the room since it’s located on s narrow street with no noise.

Breakfast price is 5 Euro per person. Since we read some reviews on tripadvisor  saying it was too basic and not worth it we did not took it and decided to eat mostly outside.

We had the double room with shared bathroom and paid 45 Euro/night – the price is excellent for the services the hotels offers and the perfect location to explore Athens both by foot and by metro or local buses. For next in Athens I would probably booked the same hotel but with an ensuite bathroom.

You can book online Marble House Athens for the best price & availability on Booking.com

Get the Best Fares to Athens  Compare 100s of Airlines. Book Today!