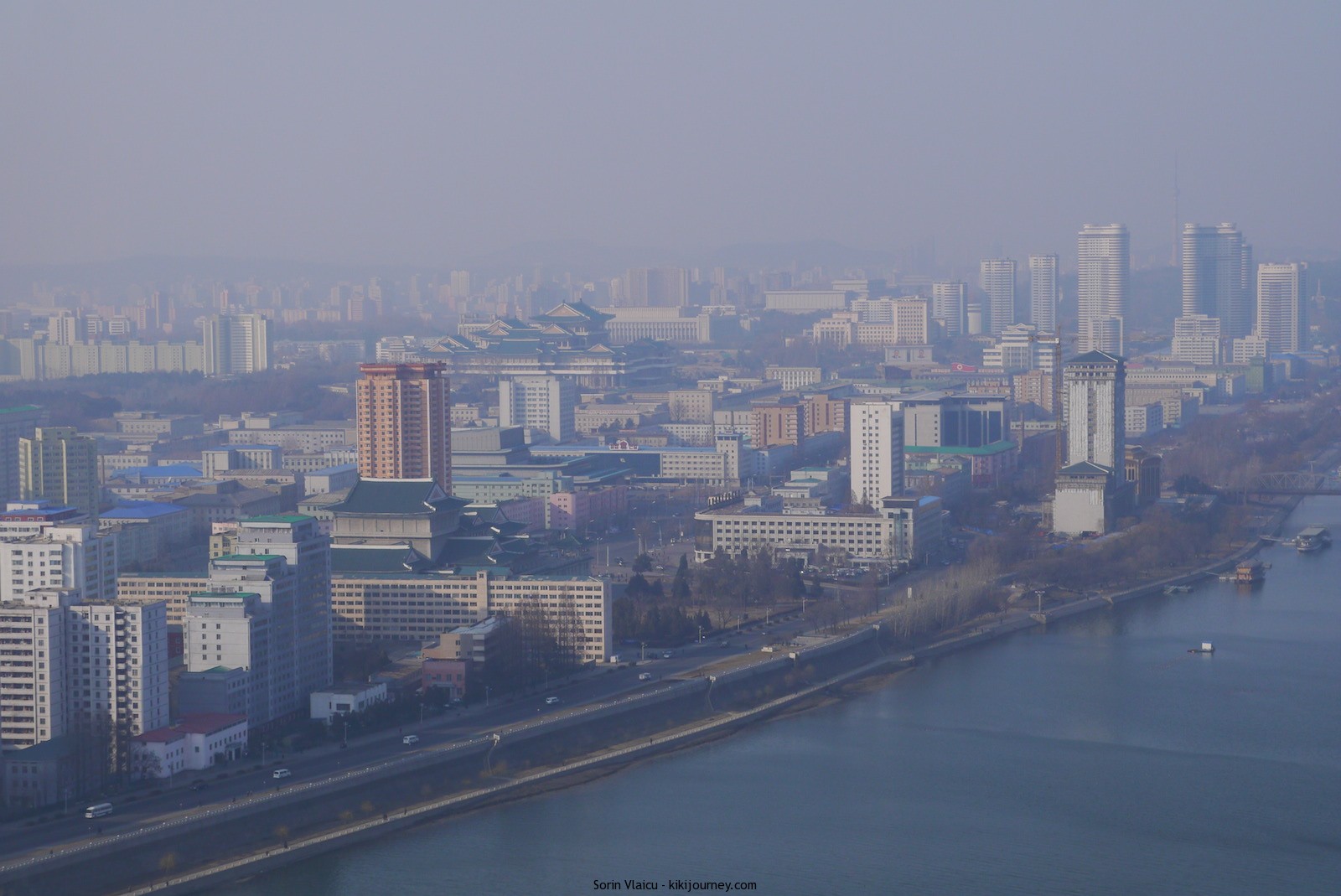 After the one hour and a half flight from Beijing to Pyongyang and a summary border control, the “real” north korean trip was about to begin.

The trip started when our passport were confiscated. There were put in a plastic bag and told, in a parenting voice, that we will have it back at the end of the trip. Only if you act well, this was the message. It was the first moment when I felt a bit scared and to ask the question: What if I do something wrong and will be stucked for life in North Korea?

We were warmly welcomed by our 2 lady guides. Their names KIM and 2 other names which I don’t remember too well. So in these stories I would call them Young Kim who was 26 and old Kim which was in her mid forties. We were escorted from the airport terminal and taken to our bus.

Let me make understood from the beginning: all the things told by our guides were 90% big lies. But I was impressed of their fast, clear and trustfull voice in their answers! Probably, at their guiding school they have a special class: 1000 dumb question to answer from the foreigners!

Of course we were not allowed to take pictures of the soldiers; they were the ones building the new airport terminal. And the reason was that they don’t like to be photographed! They didn’t have more than 20 years, looked more curious than scared by our presence and had a very innocent face.

When I asked when the terminal would be finished, Old Kim replied: it won’t take long; probably 2 to 3 years! It this was my the first smile in North Korea. 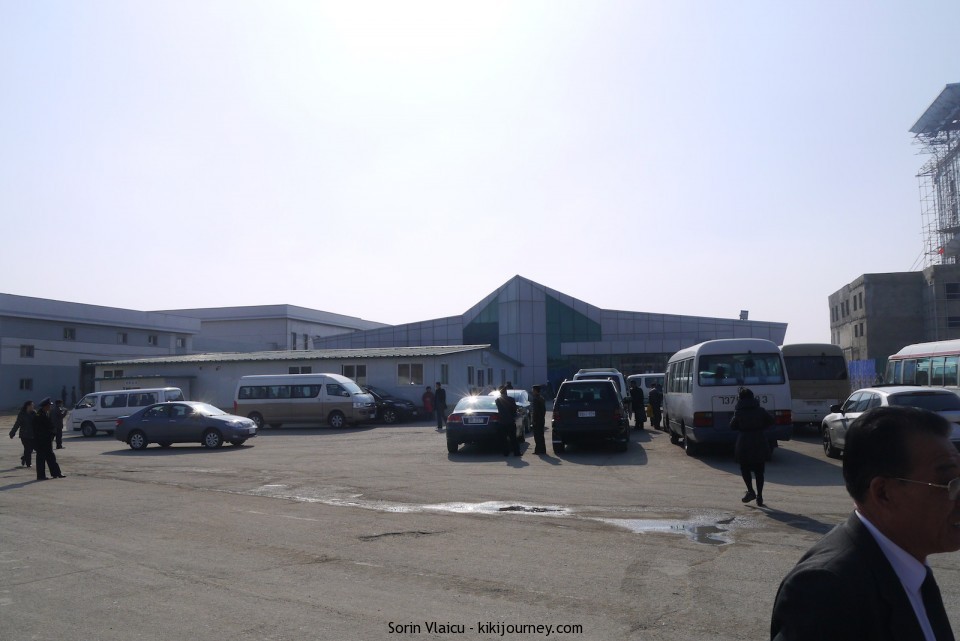 From the airport to our hotel, the ride is about 40 minutes. The roads are empty, from time to time you will see some pedestrians or people on their bicycles. The spring was on its way but the landscape was still grey and brown. With every kilometer it was gloomier. Things changed a bit when we entered the city: children playgrounds, day to day life was as normal as into an imperialist country. 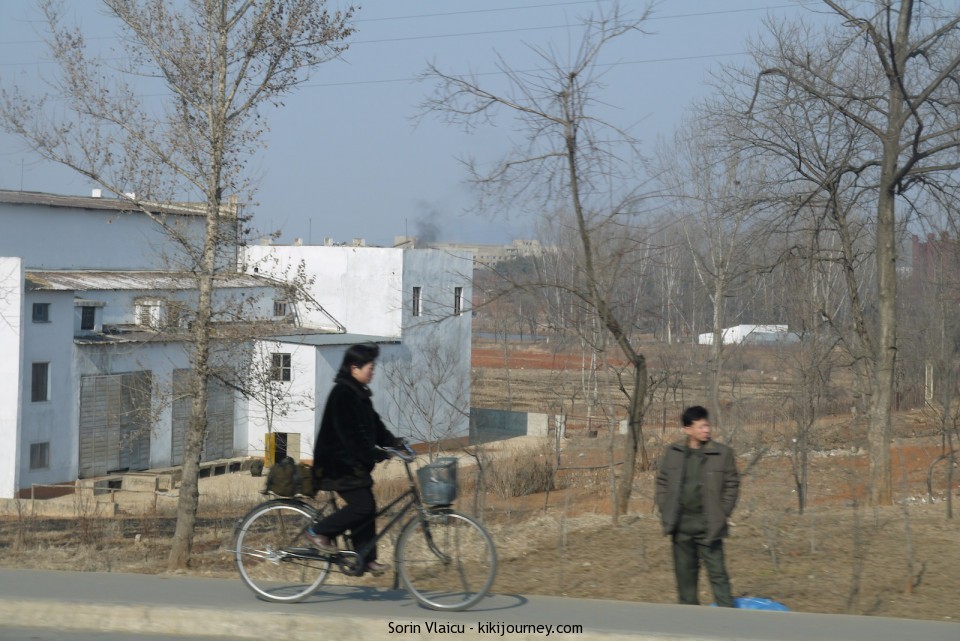 I was a bit surprised to see people jogging? I mean: jogging in North Korea? But people are dying her due to lack of food and they are jogging? You have to understand that the Pyongyang people are the special one: have the right to stay in the city, are from a good family and a excellent background and probably mostly of them are in the party and do have special privilages; extra food can be one of them. They do have to look in a good shape in the tourists photos. 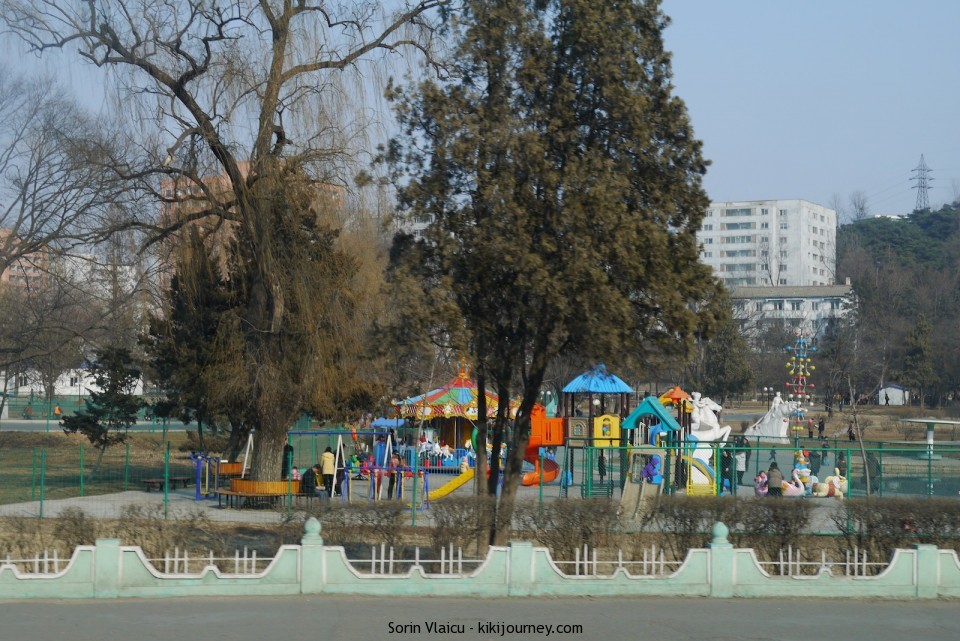 Everything we were showed was just for propaganda reasons: look how well things are here, people are happy, people do have everything for free and we will give you a lot of food to see that we are not starving. And yes, a normal north korean eats the same food as you do! Things can be funny till one point but them, when you start to think how the real things are like, you start to be said, depressed and feel like you made an error coming to this forgotten country! 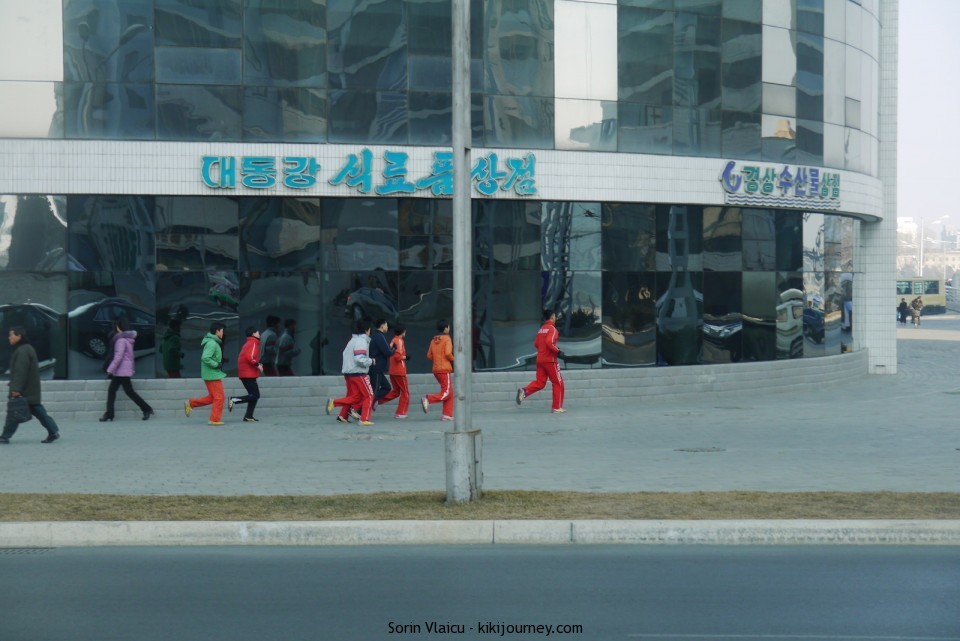 Our group was not fully reinstated because some were coming by train. Since our afternoon was free, the guides proposed us to go to the train station to wait for the other. And you left; train station was close to hotel. Less than 5 minutes drive; it would have been a lovely walk but we are not allowed to walk that much. Only the north koreans are allowed since this is their only means of transportation.

When I first stepped out of the bus, I acknowledge for the first time that I am for real in DPRK!  It was a warm spring day, a lot of people in front of the station. I was so close to them that I could touched them. It was like in a movie: people coming from nowhere and heading to an unknown destination. Like the figuration in the movies. They did not looked at you at all as if they were scared of you. They are told and taught from young age that they americans and the japanese are coming just to kill you and your family and rape your sister! No wonder they are so scared!

At some point I was having the feeling that I am in the Truman Show Movie. I saw one old lady just walking in circle and same people coming and going; could have been only my rich imagination. But how much was is real and how much fake? And why to put such a show only for 10 people? Waste of time and human resources!

We entered the train station and since the train had a 15 minutes delayed, we were asked to wait in the train station waiting room. It was a big,cold and empty  room  At first it was dark but after our arriving the lights were turned on.

It had an old and a musty odor. It had even a shop but probably all the items had at least 3 years old. At first we were told that photos are allowed inside but after we started to take photos we were not permitted anymore? Why not to be allowed to take photos in a insipide waiting room?

After our arrival, the big armchairs which were empty at first started to be occupied by “normal“people. The question was why now and not before? They looked like normal people with baggages, waiting for a train to be catched!

Strange, we were asked to pay a small fee in order to enter the platform. Same scenario on the train platform as in the waiting room. There was no one there! For 5 minutes I turned my back to the main entry just to take some photos. When my eyes switched again 180 degrees, the platform was full of people as if they were brought by someone just for our arrival and for the train arrival.

The train was just about to come; with a slow speed. Suddenly music was put! It was getting intense in terms of type as the train was approching. When it finally stopped it was as its maximum. It was as if the ..sons were coming home after a very long, long time. The train was localy and internationaly in the same time. The last 2 carriages were the one coming straight from Beijing.

Same as outside the main building people were hardly noticing us as well; as if you were invisible to them. Their main focus was their relatives; and it was normal. Probably they did not see them in a very long time. As I was saying before people need special permits to enter the capital of North Korea, Pyongyang. And in a lifetime, the one moments when you could see your relatives are at a funeral or wedding!

The platform got empty as fast as it got full. In less than 2 minutes, everything was back to normal. At the exit, while I had no trouble to get through the security, some people were stopped for their papers to be checked.

The day ended with a decent dinner at the hotel. It was taken in the chinese restaurant. We were the only customers there; it was like a private party where we have rented the whole restaurant just for us! After the dinner and a small tour of the hotel amenities, it was time for the rest. Ahead of us was to come 4 full days and everyday would be an like a new adventure!

Closed the eyes and I knew I am in a safe place. We were probably watched and guarded on the same time! Under the warm blanket and into a heated room, dream were not to come. Because in North Korea there are no dreams. The coldness of the apartments, the lack of heating or electricity does not allow you to dream. Your only can dream to live another day…. How I (almost) Got Arrested in North Korea 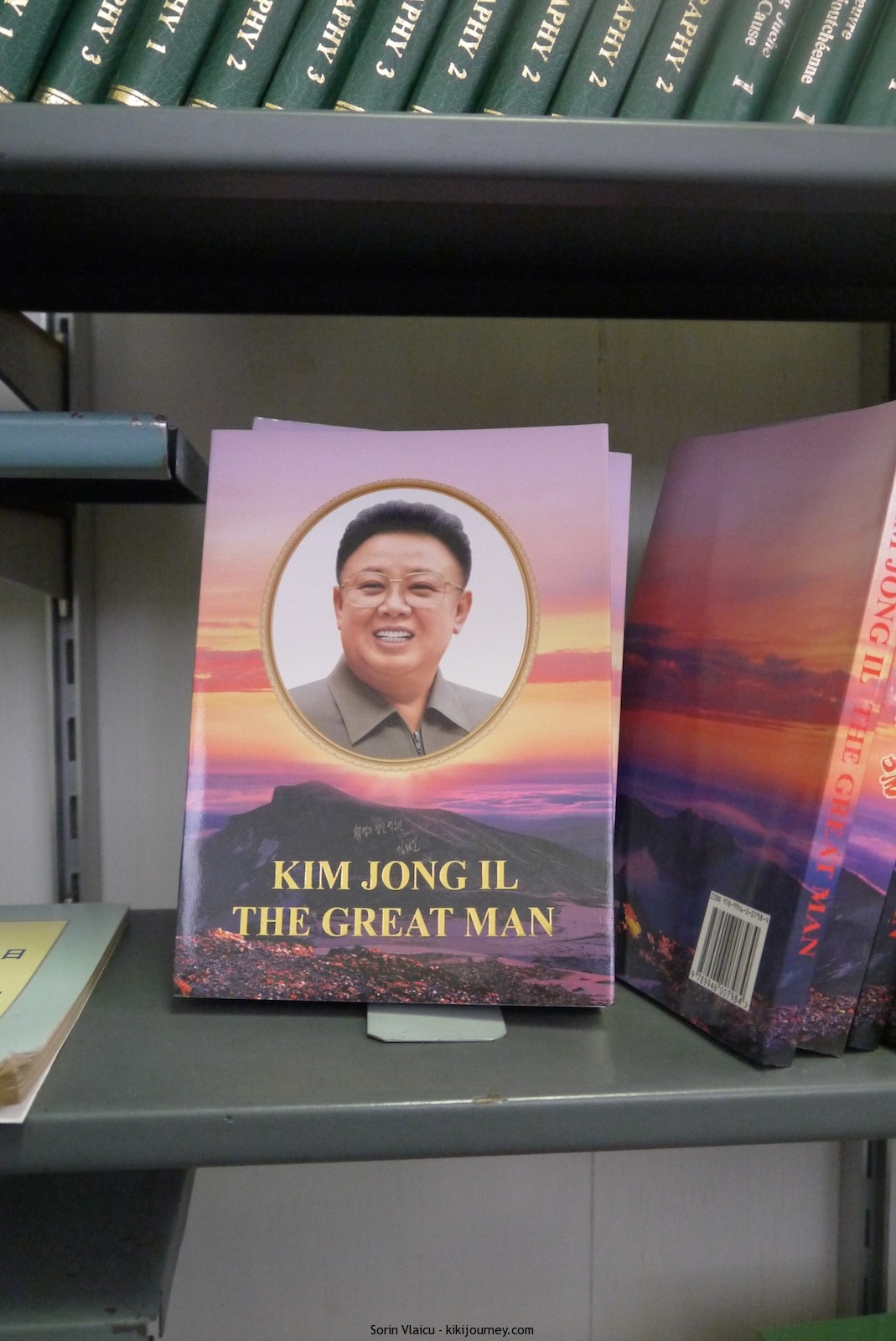