With so many options for a night river cruise in Bangkok as Shangri-la River Cruise it’s difficult to find the right one for your during your trip to Bangkok and Thailand on Chao Phraya Cruise. Each river cruise has it’s on pro and cons and the budget is the first thing when it to choosing one.

Last it would be: should you pick a night river cruise with our without dinner? There are several river cruises in Bangkok which depart earlier (for sunset) and had included only cocktails. The rest of the cruises which depart around 7pm so after the sunset have all dinner included.

I had 2 options in my mind after searching only for an options to suit my needs. The luxury river cruise operated by Manohra and Shangri-la Cruise in Bangkok. After reading the TripAdvisor Reviews and food was the lowest point in terms of reviews I decided to book the Shangri-la Cruise. Even if the price was much higher compared with Klook I decided to book online as my Revolut Credit Card has the best rate to change from Euro to Thai Bahts. If you are traveling in South East Asia I suggest you to take the Revolut Visa or MasterCard with you as you can get the best exchange rate and very low commissions.

The most expensive river cruises in Bangkok have the pick up included from your hotel in Bangkok. Since I know Bangkok very well and Grab is a very cheap options and having a Grab Discount as well I booked a Grab Plus and got a very fancy red Range Rover. Arrive in 25 minutes from my hotel in Sukhumvit Road to the Shangri-La Hotel a 5* luxury hotel in Bangkok located on the river side, where the departure for the river cruise is.

We have arrive 10 minutes before the departure and not to many tourists were present. Check in when very smooth – no voucher was needed to be presented and only my name which was on the list. We were taken on our table (which was inside and not outside) and our name was on it.

Depends when you book the river cruise in Bangkok. If during the rainy season there are higher chances of rain so your date would be ruined. Secondly is very humid and it would not be such a pleasant dinner. Lastly the food is located inside so you have to go inside and climb the stairs up and down with your plate and if you are not a professional waiter you might drop the plate!

Inside is the best options as it’s with AC and food is close located next to your table.

I was surprised to see after the boat departed at 7.30pm sharp that there were some table empty (around 3/4 out of a total of 22) and that a few table were occupied by thai couples not foreigner tourists.

Even if the cruise started at 7.30pm the dinner was served around 8.00pm after the drinks (which are not included and for your reference one beer is around 200 Bath but does not include the service charge or IVA.

The buffet style is Seafood International. Food is fresh and abundant and replaced once it gets empty. Don’t bother to be the first as it get crowded since the space is limited and food is more than plenty.

Dinner is a nice variety of seafood, Thai dishes, salad, bread, cheeses, an impressive baked fish, Chinese, pasta and desserts. The baked fish is located on a second dish in a corner and did not spot it only at the end when I was already full.

There was not to many options for vegetarian meals but luckily I am not a vegetarian persons. Instead the sushi corner was quote full in terms of options. Some indian dishes, few internationals and the rest were thai food. Sushi was OK but not great. The European dish were OK as well. As for the Thai I was expecting a more quality food.

Deserts were quite good and refreshing with many options to choose from. Ice-cream is available as well.

The ambiance is romantic (candle lamp setting and background music), no loud band is perfectly fitting. The staff will offer to take your photos with the nicest background in the river.

There was background music, but we saw river boats passing by us which were mobile floating discos, but this was fine. Music was mostly the 60-70’s – a bit oldestes for our age as most of the couple were quite young. I think dinner & show (like thail popular dances) would suit better the dinner as at some point you get bored as the view from outside it OK but on the return it’s the same.

The whole trip takes up to 2 hours down the Chao Phraya River in Bangkok. It’s 1h upstream and then 1h downstream back to the hotel. All the major sightseeings are see but in the dark as the Grand Palace, Wat Arun Ratchavararam, Wat Phra Chetuphon (Wat Pho), Temple of the Emerald Buddha and the flower market.

Overall it was a very nice experience. But maybe next time I will probably choose a river cruise in Bangkok without dinner. I think all dinners are a bit over rates and expectation are high but the quality is not that awesome as people expect.

Even if the atmosphere was a quiet one with music played from a CD I think it’s more nicer with a live band or at least a show. The river cruise is quite long – up to 2 hours and at some point you will get bored.

You can book here online the Shangri-la River Cruise; other options are available here. 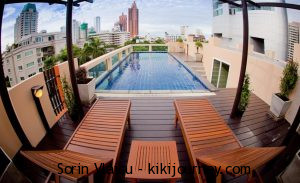 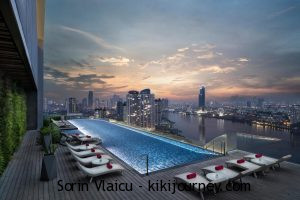