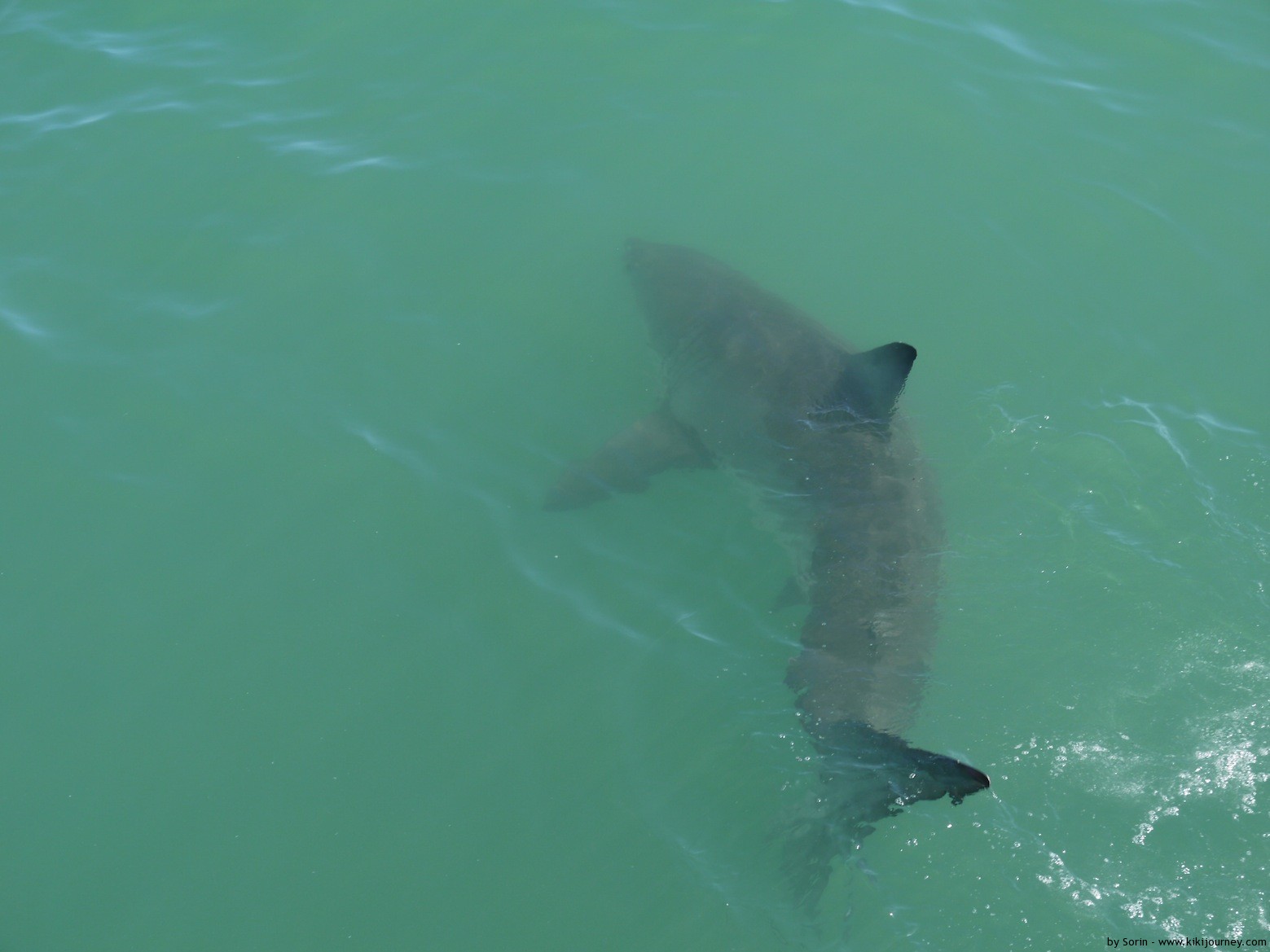 To be honest, the Shark Diving South Africa experience it wasn’t that cool as the water rafting in Jinja or the bungee. Maybe I had high expectation, or I had bad luck.

Which is the best shark diving company in Cape Town?

How much does it cost to go Shark Diving South Africa?

It depends on the services and the company.

The morning started very early. Booked the day before the tour for a decent price of 1200 Rands which is around $120; being low-season I got the best price for the shark diving in South Africa. Usually I need around 30 minutes in the morning to get ready; you know, the normal stuff. The car was supposed to pick me up at ten to seven. I am not sure why in my mind 10 to 7 was 7.10.

Woke up 20 minutes earlier then the alarm clock. Not sure how but I suddenly realized that I put the alarm clock wrong! So instead of 30 minutes to get ready I had only 10.

Not having a flashlight anymore, it was a bit hard to find the stuff in the room; usually if someone else is sleeping in the room I do not turn on the light. Managed to find all the necessary things and here I am heading to the sharks!

Cape Town to Gansbaai, the place where the shark diving occurs is a 2.30h ride. The ride was a scenic one; first we passed the infamous settlements were the black community is leaving. Which was strange that on the other side of the road the colored community was located and further on the hill the Afrikaans community had their houses build. They rarely mix in South Africa,

After a short briefing and a paper signed saying that the company has no responsibility  whatsoever is anything happens on the sea, here we are on the sea heading to see the big white shark. The boat trip was an interesting one. Some big waves and the strong wind made the boat a bit instability for my standards. Which was more interesting was that we were sailing as if we were going all the time up. I choose the cabin to stay; of course not being scared of falling in the other, but not to get wet.. jajaja.

After seeing some imagines with the big white in the place where we had some snacks too, I was starting to feel afraid and not sure if I wanted to get in the water. It was cold too, and windy and going into not so warm waters was another problem.

At first I did not put the diving suit. I was waiting in the boat to see how things are going. And they were going bad. 40 minutes of waiting and not shark arrived. The water was not clear and you could hardly see them from the cage. A first group of brave people stayed in the water for 40 minutes just to know each other better.

The cage seemed  safe enough and it the past 21 year not major accident happened  The guys do know what they are doing. One bad accident with the sharks and their shark diving business will fall apart.

40 minutes and then the first sharks arrived. It was a young male, around 2 meters long. It wasn’t that scary. Second shark arrived shortly and I was bigger; around 3 meters. We were to find later that day that it total 4 sharks visited our cage.

Sitting in the boat I was saying to myself; you didn’t payed 120 bucks just to stay on the boat. So, finally decided to put the diving gear and go into the water. Water which wasn’t that cold, I as thought will be. The only problem was that you could barely breathe throw that gear and to see, the same.

Holding myself tight to the bar above me and having my legs close to the boat – don’t put it in front; otherwise we might see some blood coming soon – I was waiting silently for the sharks to come. I was lucky cause 2 sharks came while I was in the boat. And lucky enough to see one of the jumping abut from the water, catching the meat and showing us the teeth! That was amazing.

The worst part of should I say it the best part was the fact no big white cane. Saying that it was bad? Not sure if I really wanted to see a big one; maybe from the airplane yes.

A decent lunch, some lasagna a 2 glasses of wine and I was warned again and ready to go to the hostel.

Worth the money for the shark diving? I would say yes. It was an interesting feeling to share the water with such a lovely created; and gently one cause usually they don’t attack humans because they don’t know the human flesh and seems we are too bony for them!

Would I do again the shark cage diving Cape Town? Not sure if in South Africa but I would probably try it in Australia and other location around the globe!