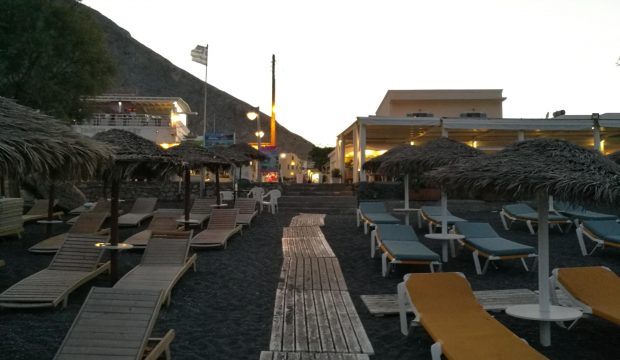 I will begin the review of Irini’s Rooms Santorini hotel with a joke as we were being transferred from the Santorini port to our hotel in Kamari, Santorini. The driver did not have the clients hotel details and asked us to write the hotel name and address on a piece of paper. Our client from Ukraine asked where her hotel in Santorini is located reply – it’s close to a church. The driver then replied: you know, there are more than 600 churches in Santorini!

When I was asked about Irini’s Rooms Santorini his reply was: you know, there are 4 differents hotels in Santorini which are called Irini! That means the Irini name was popular in Santorini in the past!

Where to Stay in Santorini

Santorini is a fantastic island but in the past year (mainly due the asian tourists who are willing to pay a higher price for accomodation) has become very expensive). During the first researches regarding Santorini the prices I was showed on booking were above 300 Euro per night in Oia or Fira. Asking my friend from Greece is she knew some decent accomodation in Santorini she advice me too book as soon as possible since the hotels on the islands gets fully booked very fast during the summer months.

I have decided to book a hotel room in Kamari and the reasons where the decent price I found ( 100 Euro/night with breakfast included) and the beach which was closer to the hotel. One important note – if you are coming to Santorini for the beach only, better do not come. Santorini Beaches are not very good (mostly black sand and with stones) and not very clear water. Look for another island. Santorini is for photos and atmosfer.  Will revert with a different blog post regarding in who to choose the hotels & area to stay in Santorini.

How to Get to Irini’s Rooms Santorini

There is no direct bus from port or from the airport for Kamari and throw to Irini’s Rooms. It’s a bit strange that there is no direct bus from the airport since the Santorini Airport is located less than 4 km away from Kamari. You must take first the bus from port/airport to Oia bus station and then change to a bus which heads to Kamari; if you have luggages is not the best solution due to the bus change. The bus price is 1,80 Euro per person per way. 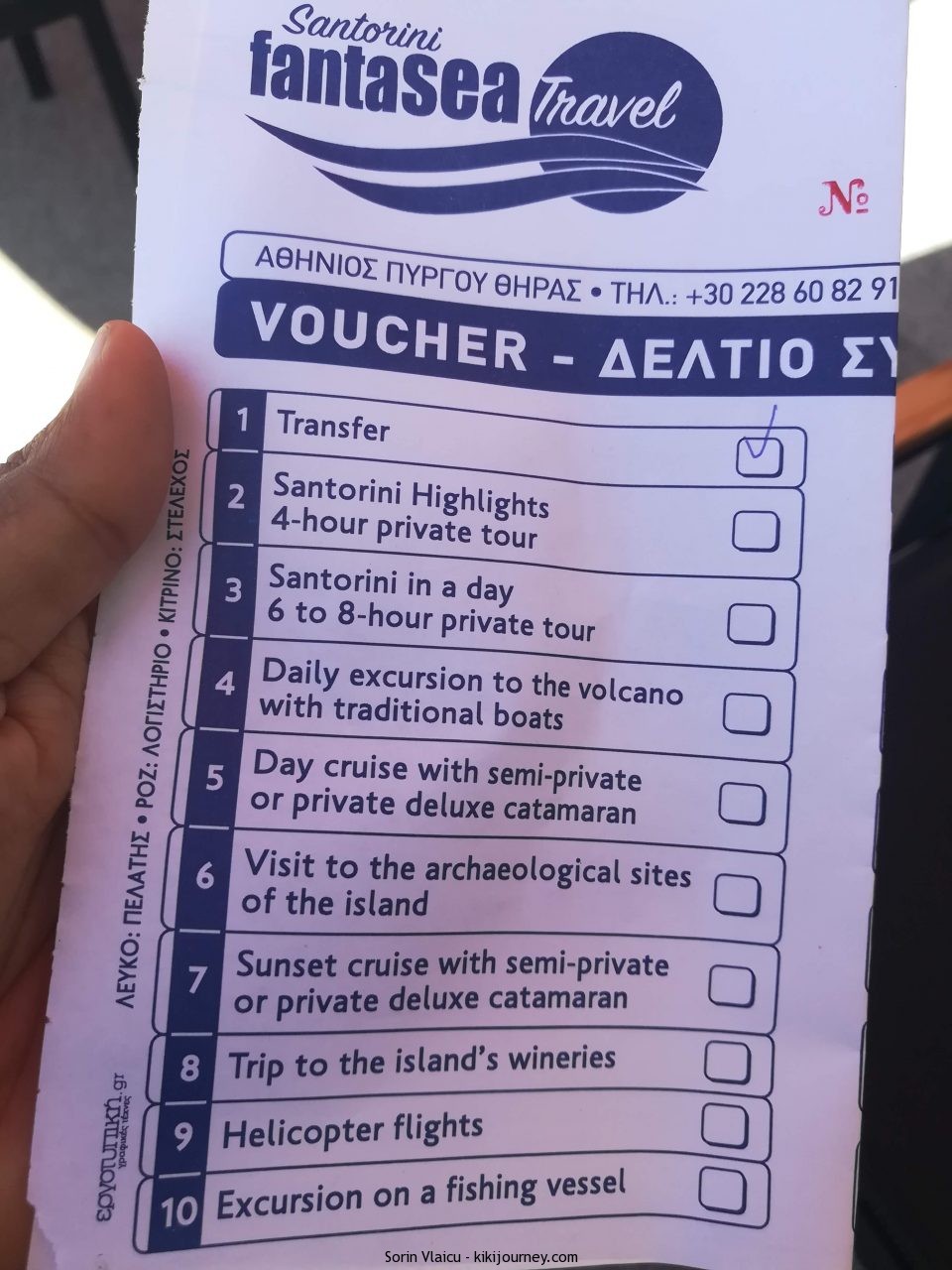 It was a good location for taxis as well, we didn’t have to walk far when we told them we would be at the parking lot by Irini’s. 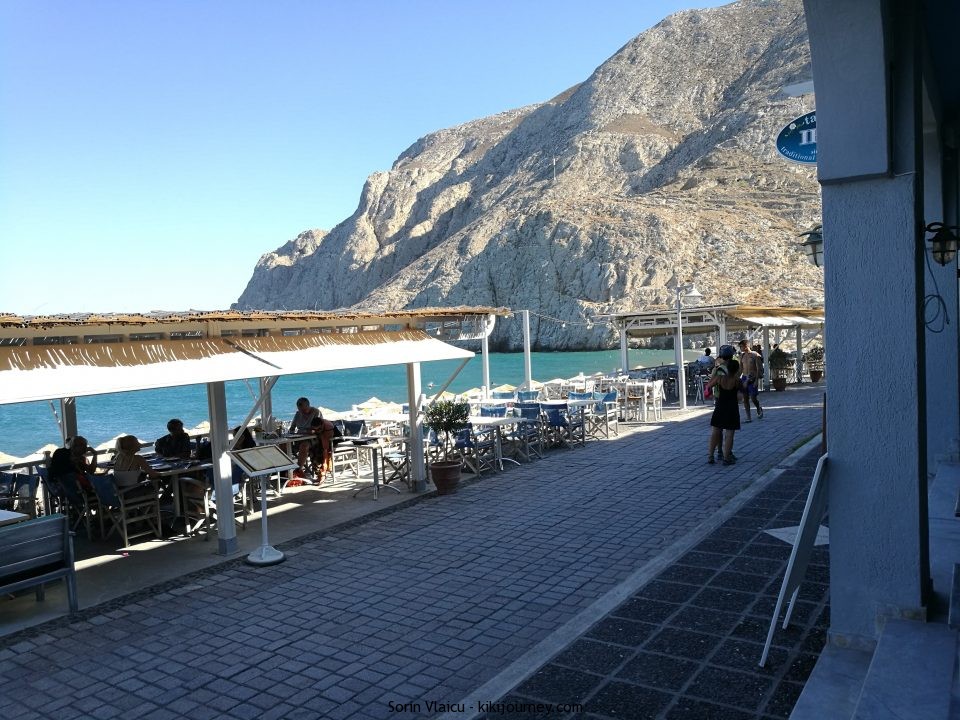 Our hotel in Santorini was located in Kamari and very close to Kamari Beach which stretches for miles; half of the beach is well maintained with umbrellas and bars & restaurants and the other half, close the the airport is not designed yet and you can stay free of charge at the beach.

Perfect Location in Kamari village Santorini with a traditional beach tavern below the rooms where we have the most delicious meals after swimming in the clear waters of Kamari beach just 10 steps away of our room. On Santorini you can find cheap and always spacious rooms if you stay away from the hotels at the caldera of the island. 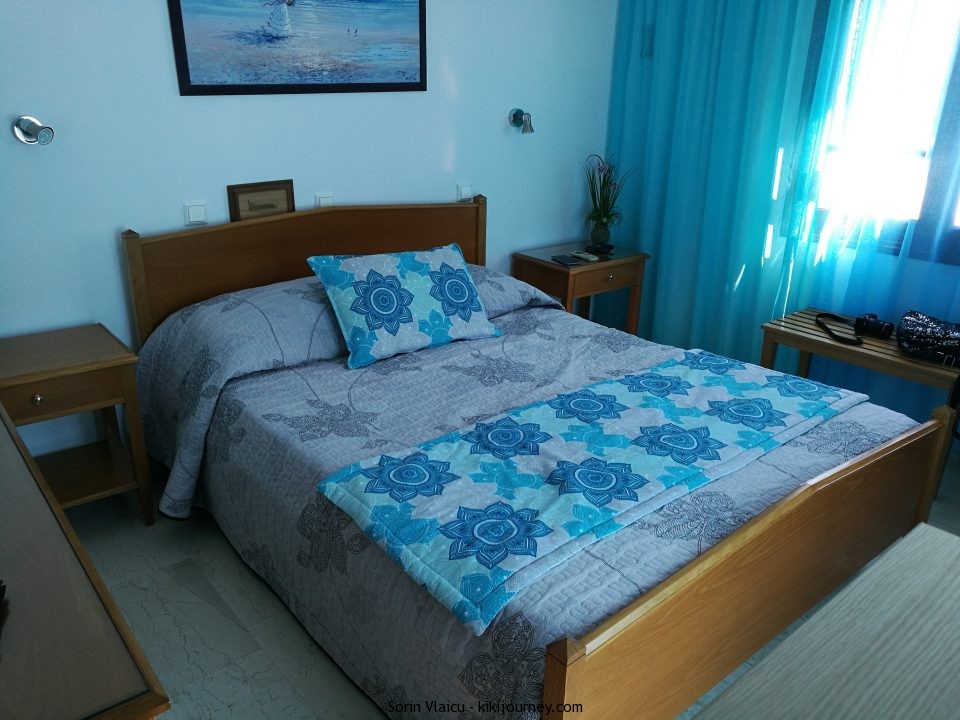 Our room was very clean and suited our needs perfectly. It wasn’t luxurious but it didn’t matter to us since we spent most of our time on the beach or exploring the small town of Kamari.

As we were on our pre-wedding holiday I wanted to book a room with a Sea View but it was not available (only 3 sea view rooms are available at Irini’s Rooms) and we have booked a room with mountain view.

Room comes with a spacious fridge, AC (with is a must for any hotel in Santorini or in Greece), a closet (a bit old but it was decent) and small area with a mirror as well. There are a TV as well in the room and most of the TV channels were greeks.

Bed was big enough and the pillows a bit soft but the sleeping was very good during our stay. 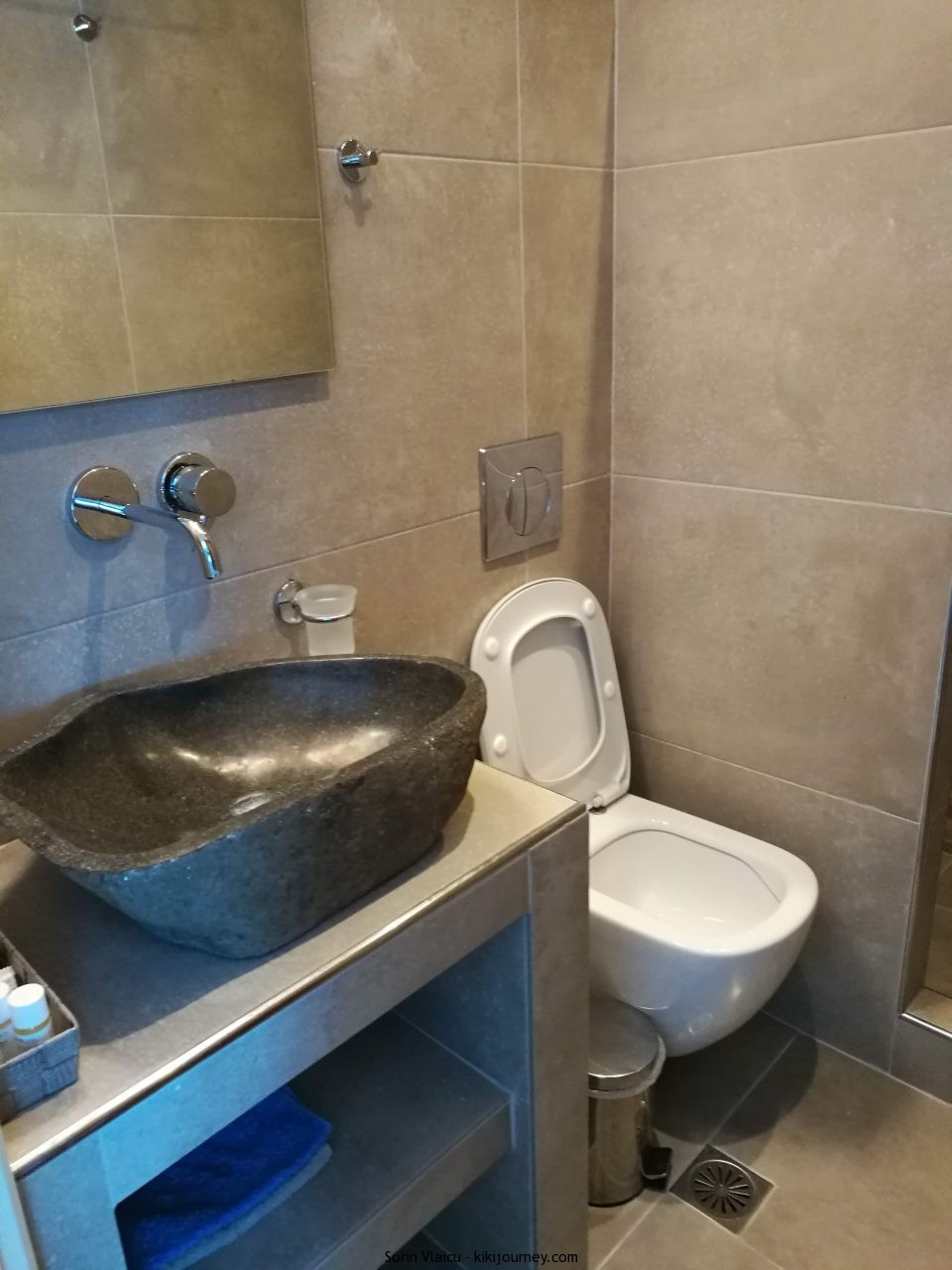 The room might have looked a bit old (mainly due to the bad choice in choosing the bedsheets or the closet) but the bathroom was newly renovated.

Shower room was separated from the main toilet and it was very spacious – you can fit 2-3 persons in the same time. 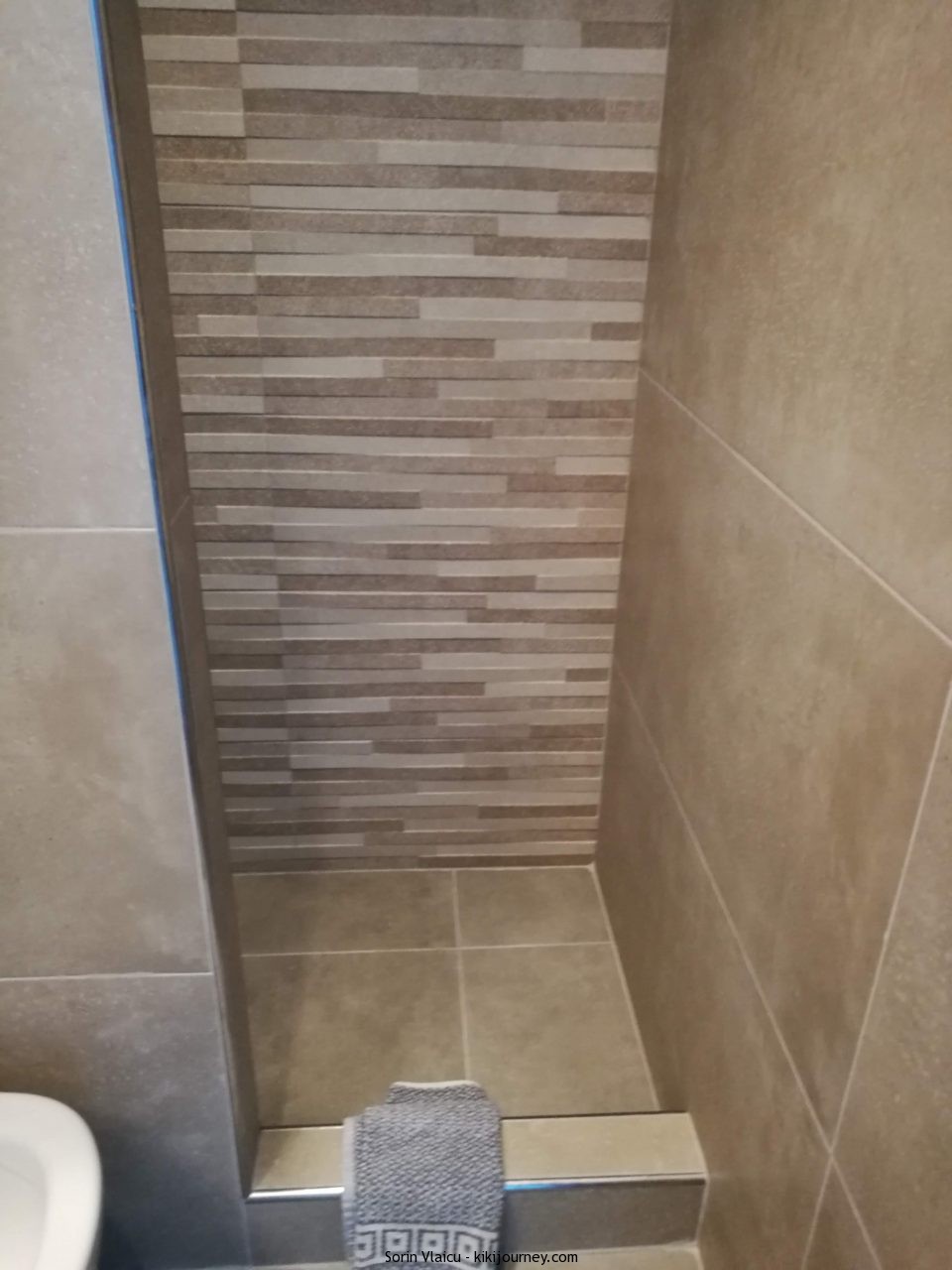 Free amenities as shower gel or shampoo had been provided and replaced every day; the room was cleaned on daily basis.  Even one day when we were still in the room, the cleaner tried to enter our room without knocking on the door. 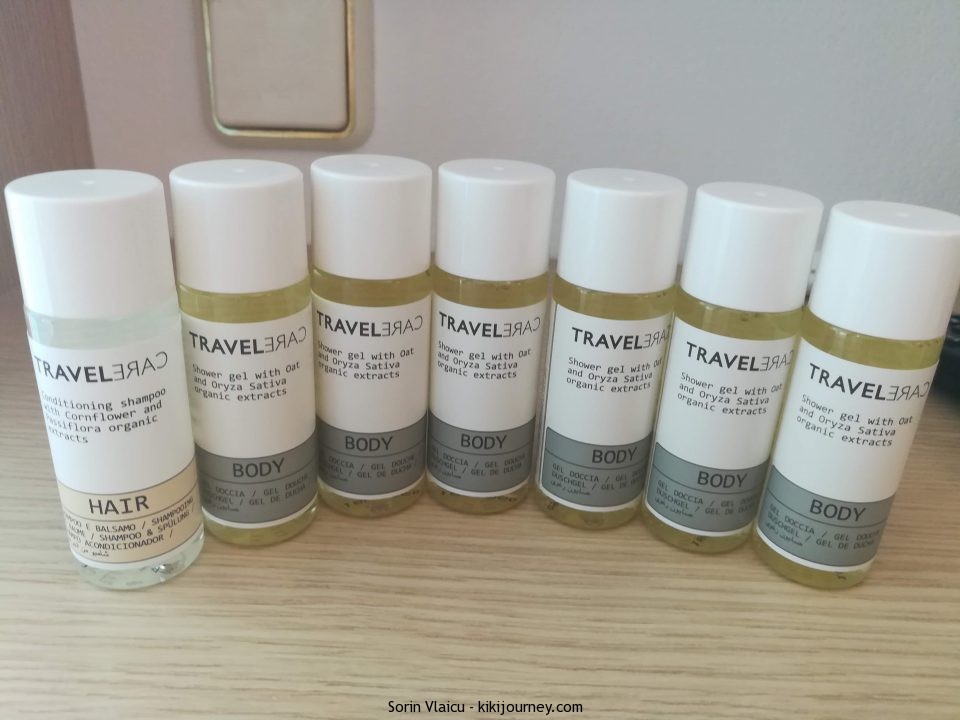 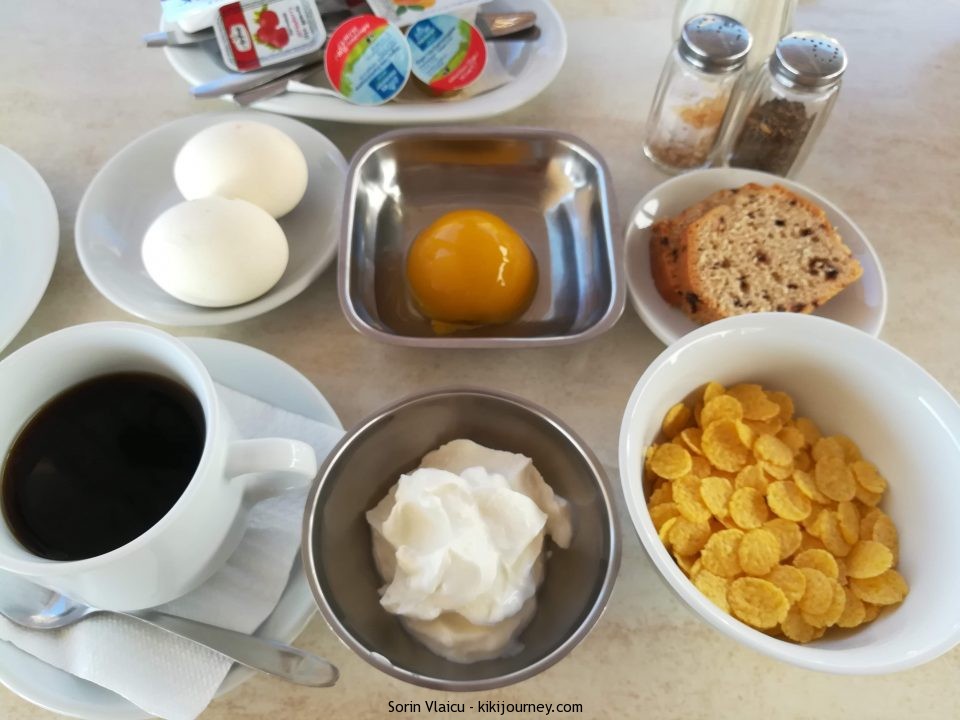 Breakfast was very good. I had almost every day 2 breakfast because my wife did not like the greek breakfast. Every day it consist of fresh milk, cereal, coffee, a very good and creamy greek yogurt. Boiled eggs, butter, toast bread and cake was served as well. It’s was quite OK but it was the same everyday. For a longer stay maybe some different kind of cooking (at least the eggs) would have been OK. 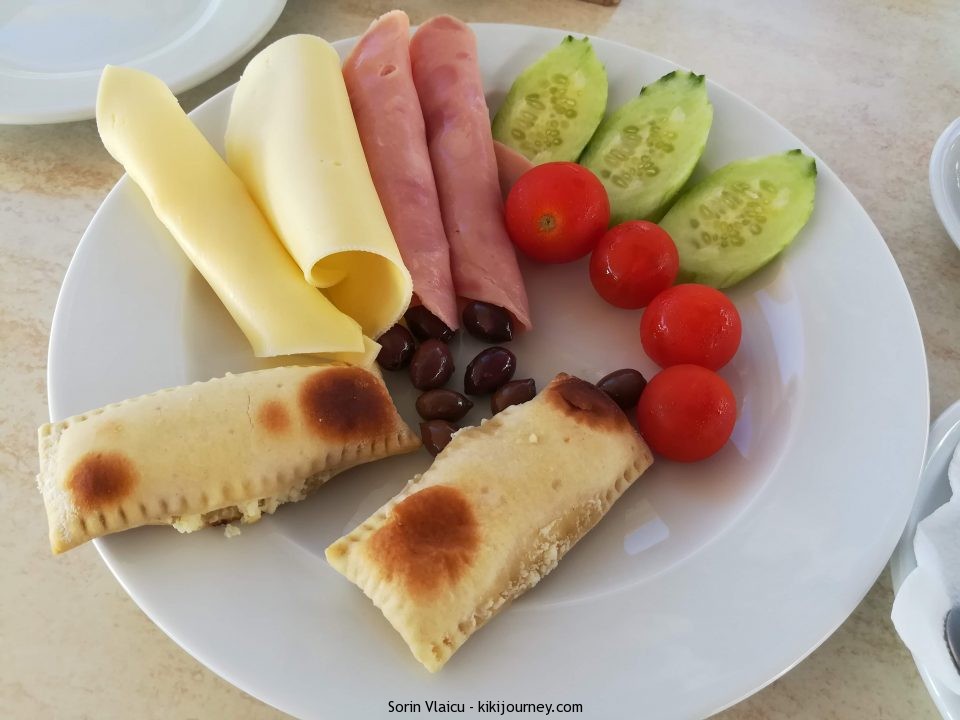 On the second plate tomatoes, a stuff cake with cheese, meat and olives were served. 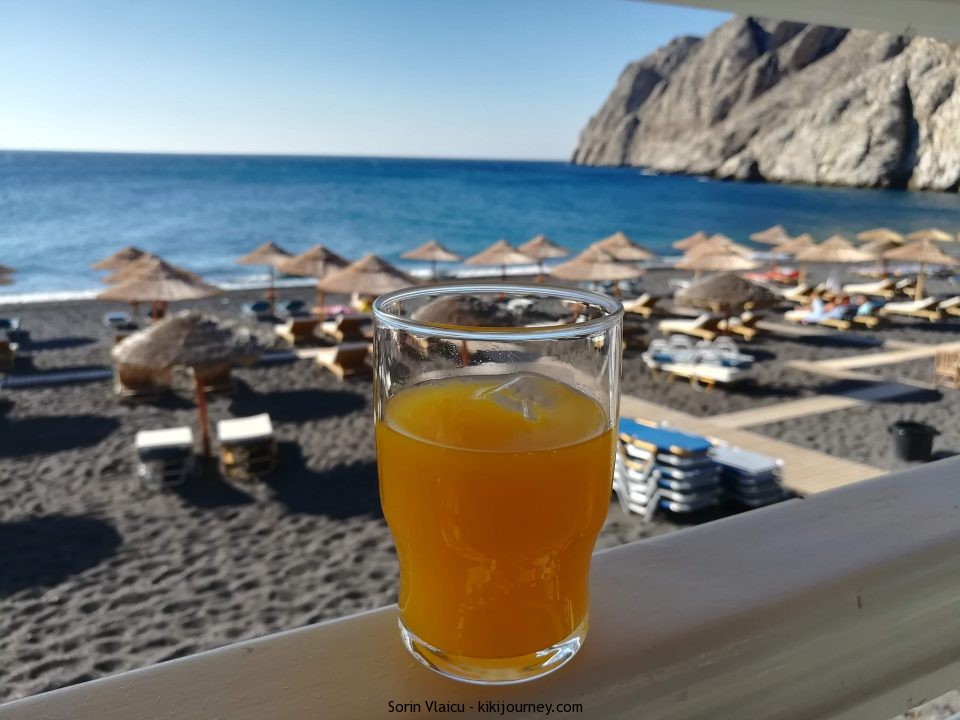 As well orange juice was served. What made the breakfast more enjoyable was the location of the place – just on beach side with a great view on the sea!

I booked the room on the official website since it was not available on Booking.com. We can book online on Booking.com  or Hotels.com for the best prices & availability.

Get the Best Fares to Santorini Compare 100s of Airlines. Book Today!