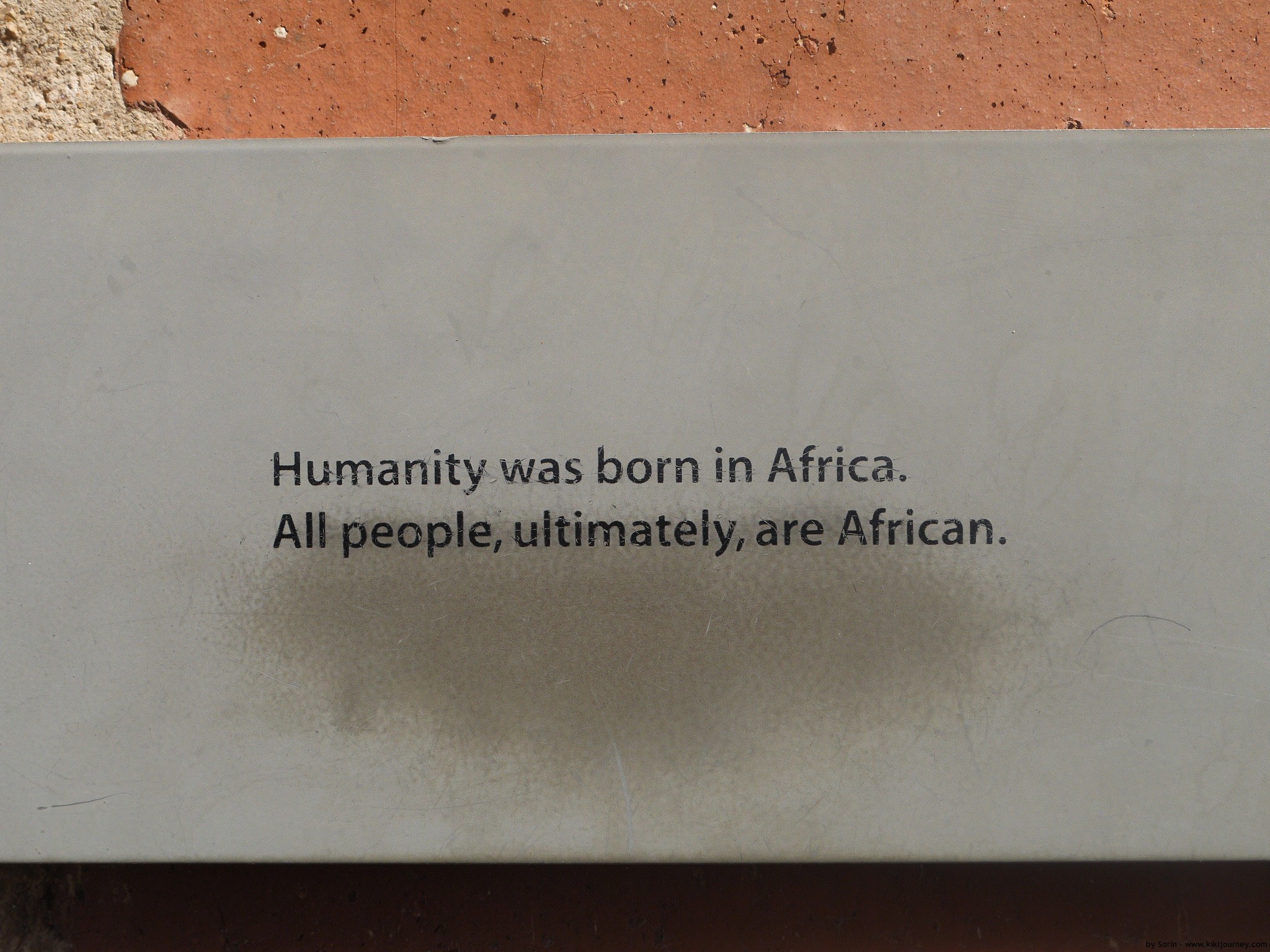 This was not the first museum of this kind visited. So more or less I had a imagine about how it will be. Before being the Uprising Museum in Warsaw – an excellent one and The Killing  Field in Laos – even if it has a different approach but well organized as well.

Strange fact: the museum was built by a casino consortium. In 1995 the South African government set up a process for the granting of casino licenses and the companies had to prove they would attract tourists was well. The cost of the construction of what became the Apartheid Museum – approximately 80 million rand – was paid for by Akani Egoli. The Apartheid Museum opened in 2001 and it’s a must see touristic place if you visit Johannesburg.

Like any place in Johannesburg is very hard to visit a place without having a car. Without one you either have to take the public bus to the museum ( I did not see any mainly due to the bus strike) or the most convenient one is the Johannesburg Hop-On – Hop Off Bus. One day ticket can cost up to 13$ – only the bus. The admission fee for the museum is 65 rands ( 6,5$) and the opening hours are between 9 to 17.

I got lucky and had a car – Marcel dropped me at the entry and waited for me till I finish the tour. Its recommend for the visit at least 2 hours and a half. Well,  to be honest 3 and a half would have been enough. There are many documentaries  to be  seen, a lot of pictures to look at and to reflect a bit.

From the begging I liked the museum marketing team – because they have a good one. The ticket: if you are white you get a whites only ticket; if black can get a black ticket only. And you can enter only on the specific doors: White and Blacks. Well, this is what I thought. I could have entered the both ways. 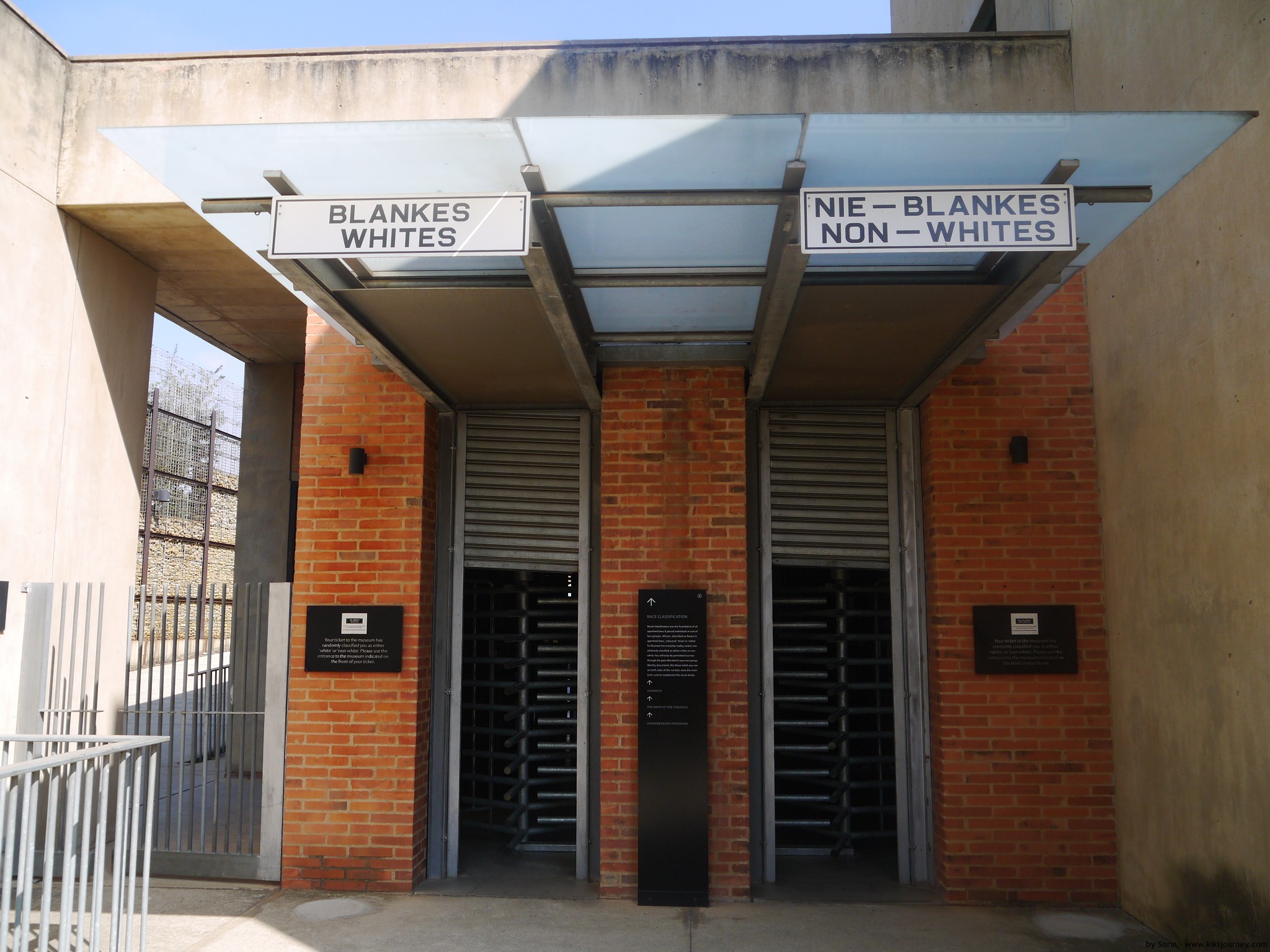 The museum has 2 important sections: temporary exhibition is one that celebrates the life of Nelson Mandela and the permanent exhibitions which explains chronology how apartheid was created. The temporary exhibition was full of color. Expressed joy and happiness. There even the car Mandela used to draw.

Which I liked about the permanent exhibition was the fluency, the details and very detailed: picture and photos.. The source of the detailed information below can be found here: http://www.apartheidmuseum.org/segregation

Pillars of the Constitution: These are seven pillars at the entrance to the Apartheid Museum, facing the parking area, and each represents what the new South African constitution is based on  democracy, reconciliation, equality, diversity, responsibility, freedom and respect.

Race Classification – Racial classification was the foundation of all apartheid laws. It placed individuals in one of four groups: ‘native’, ‘colored’, ‘Asian’ or ‘white’. Families were separated by these low. Sometimes we were classified a cleared only by the shoulder configuration.

Journeys – The discovery of gold in Johannesburg in 1886 attracted migrants from all over Southern Africa and many other parts of the world. This exhibit illustrates the children, grandchildren and great-grandchildren of some of those who journeyed to the city of gold in the years following 1886. Well, all started with gold; or the rush for gold. Immigrants from Europe come to South Africa in search for a better life. 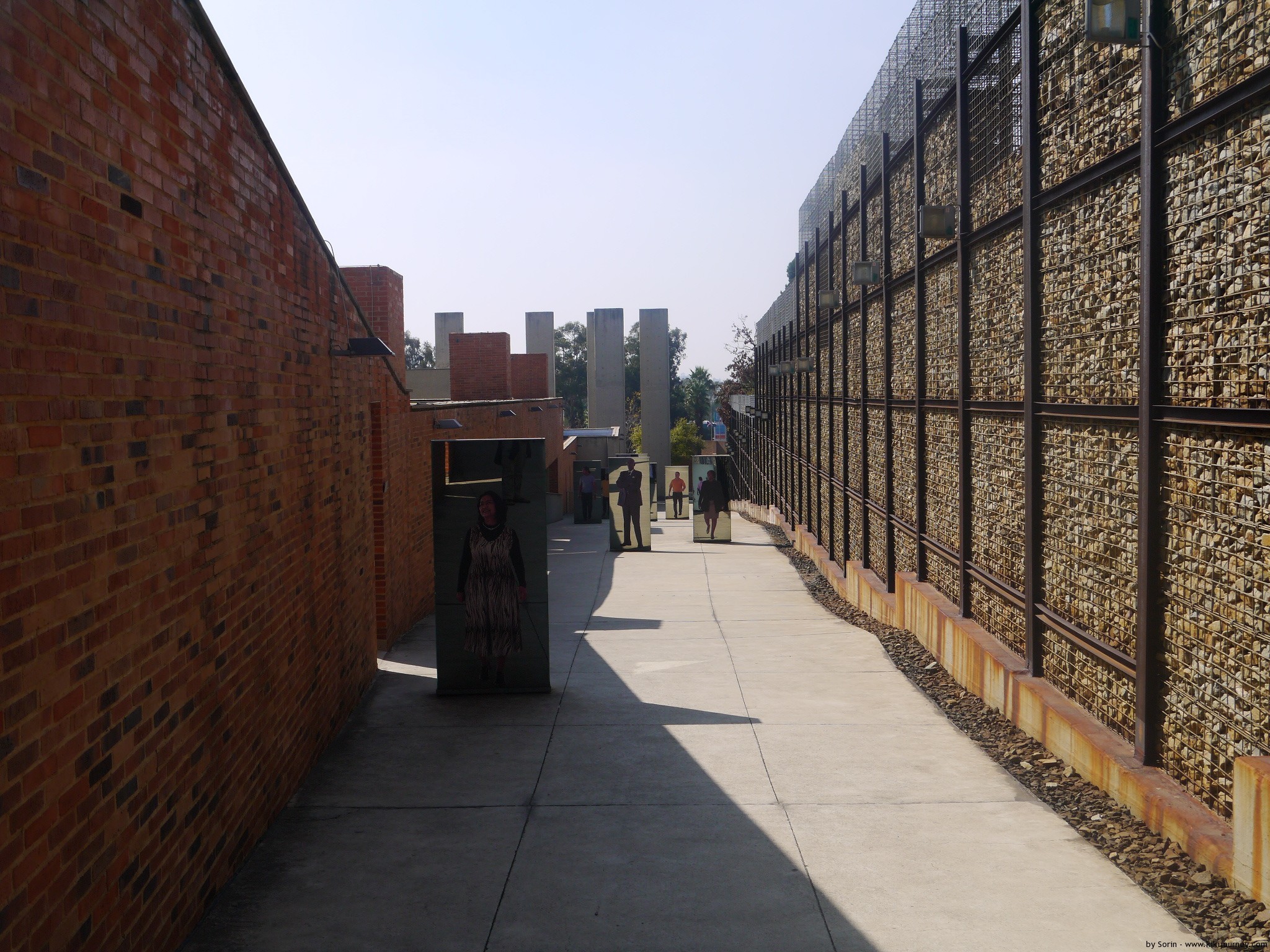 Segregation – In 1910 South Africa was united for the first time into a single nation known as the union of South Africa. The majority of blacks, along with white women, were denied the vote. Racial segregation became the official policy throughout the Union and laid the foundation for apartheid. Its strange that usually only the mind of few people decides the course of history and how that country will be in the decided.

Apartheid: This exhibit examines the social and political forces that gave birth to apartheid.  A powerful display of large photographs is shown. Entire communities were relocated only because the white man wanted that land or to relocate them by color.

The Turn to Violence: During 1959 and 1960, violence broke out in several South African cities. Till 1960, the demonstration was mainly peaceful. Mandela said in this book that the non-violent movement was not to overturn the government. They needed to be violent and even try to get weapons  from the Chinese.

Life under Apartheid: For white South Africans the 1960s was a decade of boom and unprecedented prosperity. For black South Africa, the 1960s saw apartheid harden into its most dogmatic and racist form. I  do recommend the Ernest Cole photographs which illustrate very well the times.

The Homelands – The policy of separate development sought to assign every black African to a ‘homeland’ according to their ethnic identity. Ten homelands were created to rid South Africa of its black citizens. Even after 40 years, the homelands still exit.

The Rise of Black Consciousness: The earliest challenges to apartheid came from a new generation of black youth who came of age in the 1960s. 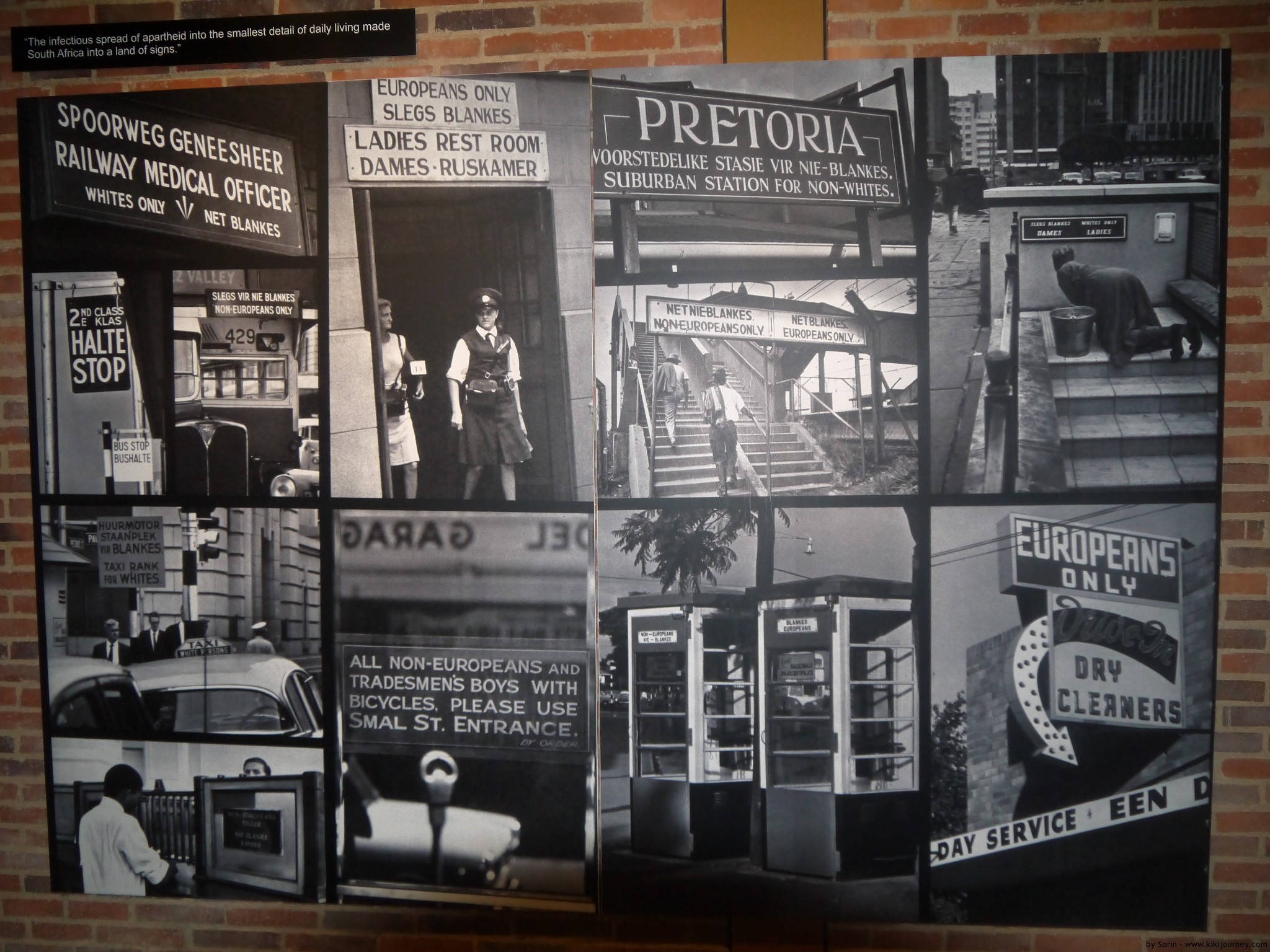 The Significance of 1976 – 16 June 1976 was a major turning point in South African history. The protests by Soweto school children on that day marked the end of submissiveness on the part of the black population of South Africa and the beginning of a new militancy in the struggle against apartheid. South Africa would never be the same again.

Total Onslaught: The 1980s were characterized by the most intense explosion of civic and student unrest that the country had ever known. The government responded with new methods of repression and new kinds of reform. At the same time, larger sections of white society began to question the morality of apartheid.

Roots of Compromise: The turning point of recent South African history was 1987-90. By this time important overtures to peace had already been made. In 1987 a powerful non-government delegation had held talks with the ANC in Dakar. In 1988 Nelson Mandela, who was still in prison, had issued an invitation to the government to negotiate an end to apartheid.

Mandela’s Release: The historic moment of the release of Nelson Mandela on 11 February 1990, after 27 years in prison.

On the Brink: When the ANC, PAC, SACP and other political organizations were unbanned in February 1990, South Africa stood on the brink. During this period, 14 000 South Africans died in political violence – several times more than had died in the previous four decades.

1994 Election: On 27 April 1994 voters stood for hours in queues often stretching over a kilometer long to vote in South Africa’s first democratic election. Hopes ran high, and fears ran deep in the run-up to the election. For Africans, this was their first chance to vote in a national election, and the majority were determined to cast their vote. A sense of euphoria gripped voters of all races, especially those opposed to apartheid. The election, which took place over a few days, was largely peaceful. The ANC won 63% of the vote, the National Party 20% and the IFP 11%. These parties formed the Government of National Unity.

The Miracle and Beyond: The election of 1994 was seen by many as a miracle. It was one of the few times, perhaps the only time, that a colonizing group had given up its power without a civil war or large scale external intervention.

The New Constitution: The symbols of South Africa’s new nationhood in the form of the flag and the national anthem are displayed here. The core values of the constitution are repeated on the walls of this space. In the center is a glass structure which contains a pile of stones. Visitors are invited to take a stone from the right and place it on a growing pile of stones on the left as a commitment to fighting against racism and discrimination wherever they may encounter it. This is the reason for the Apartheid Museum.

To understand the Apartheid, one first thing to do is to visit the museum. Secondly, reading the autobiography of Mandela – The Long Walk to Freedom. Which I am reading it while writing these paragraphs. It will make you fully understand the roots of the conflict and how Mandela managed to take the power without major bloodshed.

One thing I haven’t seen in the museum; of course the whites are presented with their fancy cars, fancy dresses and while drinking coffee in white only areas. The ordinary, white Afrikaans is not that present at all. The Indians  and the cloud had suffered as well. But the main focus is on the back.

2 imagines remained in my mind after finishing the tour. One is the video of the first attempt of assassination of Prime Minister Hendrik Verwoerd. The video actually shows the blood coming out of his mouth, like a pig after being slaughtered.

The second one is from 1994, during the protest against the Apartheid regime. Thousands of black people, united, dancing and singing with a powerful energy. And in the same time a very scary one. Honestly, I don’t want to imagine how the whites were living in those moments. At any point it could have gone very ugly. Whites were and still are a minority in South Africa – they could have been killed in a few days. But luckily, South Africa had Mandela.

As a museum it can be in top 5 till now. It will be a pity to go in Jo’burg and not visit it. It worths every penny spend.