The Hamar people are a tribal people in the Southern Region of Ethiopia. They are quite isolated and are mainly pastoralist; so their culture still places a high value on cattle and Bull Jumping Ceremony is their main traditions regarding the wedding. There are about 45,000 Hamers in southern Ethiopia.

One of their well known rituals is called the Bull Jumping Ceremony; the ceremony takes place usually after the harvest time – late September and October.  This is an important event in a Hamer boy’s life; he must perform this ritual to be allowed to get married. If he passes it means he is ready and responsible enough to found a family. The whole ceremony takes place all day long, but the most important part is in the afternoon.

We were on our way to Turmi after a short shopping break at the Key Afar Market. Tired after so much negotiation, we decided in favor of a nice dish of tips. Then we were informed by our guide that a bull jumping ceremony is underway in a village close by. At first we were a little bit apprehensive. I knew that the ceremony usually takes place during a different period of the year and thought it will be a fake ceremony made only for the tourists. In the end it proved to be 100% real. The price of getting in the village was 400 birr per person which is about $20; seemed much at the begging but it was worth every penny!

The other good thing was that  we were allowed to take photos with no extra charge. Tell that to the Mursi!

The first part of the ceremony is noisy – the young women come to the ceremony highly decorated; their hair and bodies covered with butter and red clay they start to dance, sing, whistle and blow a horn in circles. This ritual takes all day long. Where do they get all the energy from? It’s hot and to jump and sing all the time is not easy at all. If you are wiped during the entire show, call me a whiner, but I would have been down in a few minutes. From where do they have the strength? Can be from the wine with honey, they are drinking during the whole ceremony.

Actually the ceremony did not start so well for me; as I was telling above, the women drink a lot and with the heat, it can be a strange and dangerous combination. An old woman approached me and started to whistle the horn in my face. The next moment she started to whip me too! I started to run, lost my glasses on the way and tried to get a safe place; she continued to “attack” other tourist as well till an old man stopped her. Photos of this incident will be posted shortly! 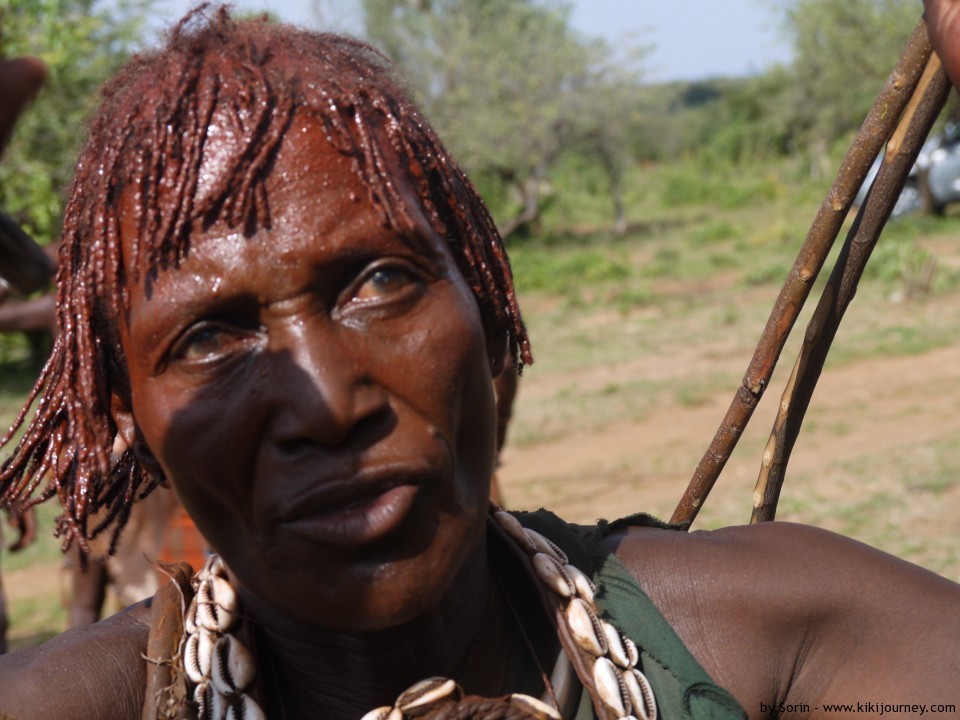 The ritual repeats over and over again for some hours. Young women are arriving and forming small groups and start singing and making a lot of noise. Don’t expect the songs to be traditional. They were singing about their prime minister, too!

I got bored at some point and started to talk and take photos of some boys who were standing close to me. The result: one Hamer boy with glasses!

During the whole ceremony a strange act for the westerners occurs. Women beaten, more princely whipped  with a rod. Usually 3 times in a row and the process repeats over and over during the whole afternoon. And the weird part is that they are harassing the men to do that! They pull them out of the tent and beg them to beat them!

Normally a human rights organization would interfere to stop the ceremony. The picture below can tell more: big wounds, intense bleeding and a lot of pain I suppose. And what is the reason behind their desire ?

Mainly to demonstrate their straight loyalty and obligation to the bull-jumper. Another idea is that at some point the girls would need some help and they go to the boy, show the scars and tell him: we did this to me, so now it’s time to help me! 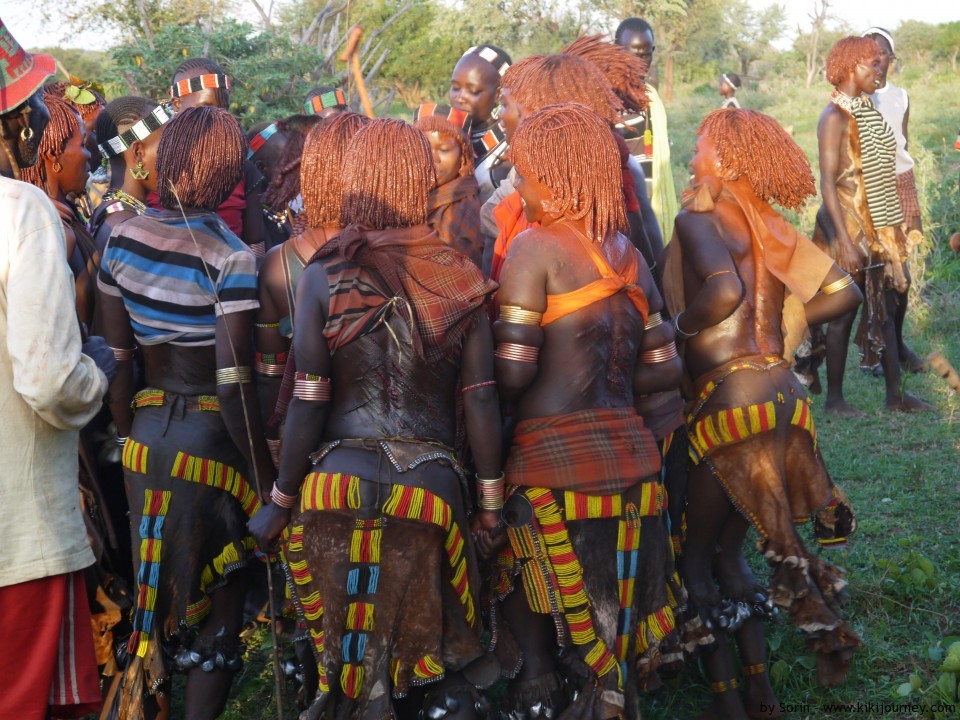 The last part of the bull jumping  ceremony  is about the luck of the young groom.  Situated in a circle and surrounded by other men, he has to throw 8 rings  in 4 quarters; depending where they land, more or less cattle he should receive the from the future wife’s family.

And the climax comes!  When the jumping  occurs. To be honest, I thought he would actually jump over the cows, but he literally walks on their back.

After the cattle are surrounded and only 8 of them are bound, the young boy is ready. Then the brave groom starts walking on the back of the cows. Several times. And he is naked during the whole ceremony. Lovely view for the ladies! To be honest, he was a little bit scared, but in the end he managed to pass the test.

It’s very hard to express the noise during the ceremony. The cows, the dust, the constant move and the dancing, the blood, the wounds, the Hamer women asking to be whipped makes the ceremony truly unique. If you ever go to Ethiopia do not miss this unique event!

Cost: the entrance to the village and the guide is 400 birr per person. The good part is that you can take as many pictures as you may want without being asked to pay as the Mursi do. Does the bull jumping ceremony worth it? From my point of your it was an amazing experience.